GSMA, China Mobile, Huawei and Haier have completed a proof of concept encompassing the deployment of edge computing, 5G and machine ... 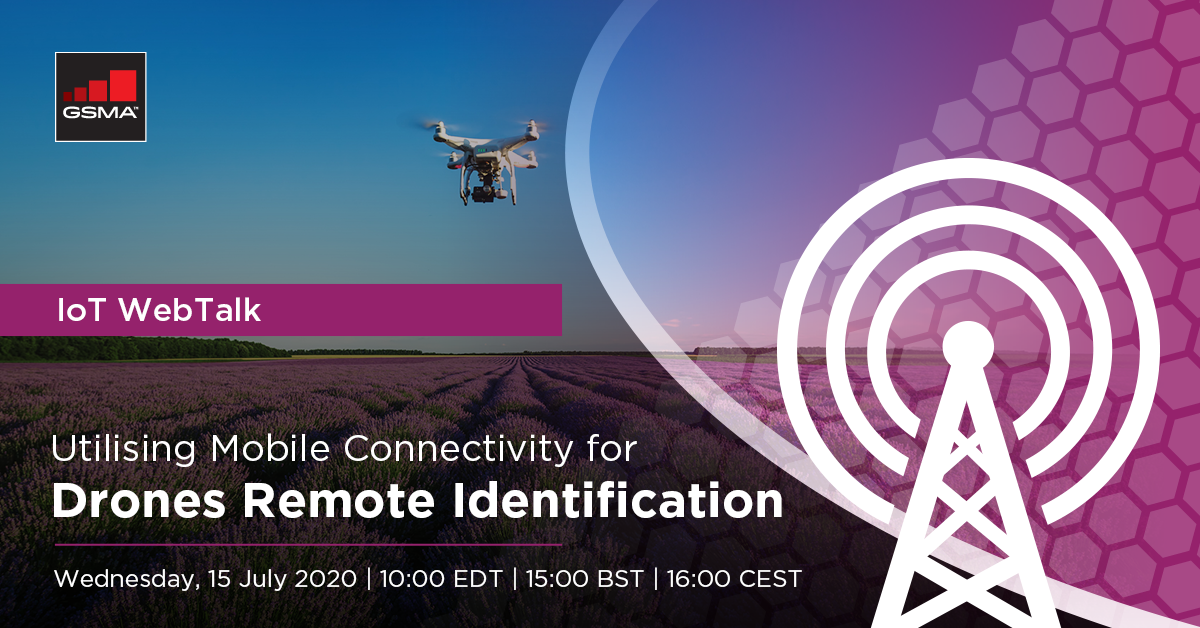 What is Remote Identification (Remote ID) and why is it needed? What are the associated regulations and how are mobile network operators delivering on these regulations to achieve remote identification for drones?

Mobile networks are global, interoperable and scalable. They provide a platform for innovative services to burgeon across many areas, such as the drone ecosystem. With the benefit of network connectivity, drones (Unmanned Aerial Vehicles – UAVs) can safely connect to and share key information with their control centres. The use of an on-board SIM provides a secure and reliable connection for transmitting a digital identification mandated by regulators; a “digital license plate” that enables the safe control and operation of drones – something increasingly called for by regulators as our skies become ever busier.

Identification via mobile connectivity has a number of advantages for the drone ecosystem:

Join the Federal Aviation Administration (FAA), the European Union Aviation Safety Agency (EASA) as well as Skyward, a Verizon company and Vodafone on this IoT WebTalk to:

Since 2016 Natale Di Rubbo has been the rulemakings officer for drone regulations and has coordinated the team in charge of developing the proposal for the new European drone regulation.

From early 2020 he has been the EASA project manager for all activities related to drone operations in the open and specific category.

Before joining the EASA, Natale was employed as an Air force officer at the Italian Military Airworthiness Authority, and had the role of project certification manager for several manned and unmanned military aircraft.

Prior to being named the new Executive Director of the Unmanned Aircraft Systems Integration Office, Peter “Jay” Merkle was the Deputy Vice President (DVP) of the Program Management Organization (PMO) within the Air Traffic Organization (ATO). The PMO is responsible for all NextGen program activity; all National Airspace System (NAS) communications; navigation, weather, surveillance and automation modernization programs; and all service life extensions to legacy NAS sensors, communications and navigation aids. Given the tight coupling between successful automation program delivery and current system operation, the PMO also leads and manages all second-level automation engineering efforts. Lastly, the PMO works with FAA operations and aviation users to ensure globally interoperable solutions for NextGen.

Prior to that position, Merkle was the Director of Program Control and Integration, AJM-1, in the PMO for the ATO. In that capacity, he led the PMO in developing effective, timely, and innovative solutions to evolving business needs. The focus areas were program control, cross-cutting analysis and integration, and special initiatives.
Since joining the FAA, Merkle has served as the Manager of Systems Integration for Portfolio Management and Technology Development within the NextGen organization. He also has held positions as the Lead Engineer for tower, terminal, and en route automation systems, as the Chief System Engineer for En Route and Terminal Domains, and as the Chief Architect for NextGen at the Joint Planning and Development Office.

Merkle has over 30 years of extensive experience in engineering and program management. He started his career as an engineer working in cockpit and crew station design on several aircraft, including the C-17 large transport aircraft. Merkle holds a Bachelor’s degree in Psychology from the University of Central Florida and a Master’s degree in Industrial Engineering and Operations Research from the Virginia Polytechnic Institute and State University.

Co-founder and Director of Aviation Technology, Skyward, a Verizon company

Eric T. Ringer is co-founder and Director of Aviation Technology at Skyward, a Verizon company.

In his role as Director of Aviation Technology he leads the product and engineering teams developing 4G LTE & 5G products for aviation.

Prior to Skyward, Eric was a systems engineer at contractors for both NASA and Sikorsky.

Dr Murray is Principal Engineer within Vodafone Group Technology Networks Architecture, where he has worked since 2014. He is responsible for identifying and developing new technologies and innovations of interest to the Vodafone Group of companies, and evaluating them in proof of concept trials.

As part of a small team, Dr Murray was responsible for developing the original “Flying CrowdCell” demonstrated at MWC’17, and later for trials demonstrating the benefits of cellular connectivity for drones, including the Radio Positioning System – Vodafone’s network-based drone tracking technology.

More recently, Dr Murray was responsible for testing the Wavelength MEC (Mobile Edge Computing) offering from AWS as part of their collaboration with Vodafone. His current role is to develop standardised APIs to support novel use cases for Vodafone’s networks, such as drone authentication.

Shortly after submitting the form below you will receive an email with joining instructions, please ensure to check your spam and clutter folders.