Broadband tariffs in Latin America and the Caribbean: Benchmarking and trends

Supply characteristics are a key indicator of the broadband Internet access market performance. The price, quality, existing contracting options and other characteristics of the supply are also an important determiner of service adoption levels in homes and businesses1. This paper analyzes the characteristics of broadband services offered in Latin America and the Caribbean. The analysis is based on a survey conducted in 24 countries of the region, to the leading operators of mobile and fixed broadband in each market, and was then compared to OECD countries. Data refers to Q2 2011, and comparisons are made against the same survey in Q2 2010.2

Despite the increasing segmentation of the supply and access speed improvement, poor quality and high prices of fixed broadband are still common in Latin America and the Caribbean.

The increasing segmentation of fixed broadband supply in the region is a positive sign of the gradual market development and the operators’ interest to expand the universe of clients served. This is reflected in the increased supply of entry-level plans, which offer a basic service (between 256kbps and 512kbps of download speed with data download volume limits) at relatively affordable prices. In several countries these plans are part of government initiatives to expand broadband access, either through state operators (as in the cases of Venezuela, Costa Rica and Uruguay) or agreements with the private sector (as in the case of Brazil). On the other extreme, we find a growing range of plans with very high access speeds (> 30Mbps download speed) aimed towards the residential and SMEs market in countries with more mature markets such as Argentina, Brazil and Chile, as well as the Caribbean (particularly Jamaica and Trinidad & Tobago).

Nevertheless, as shown in Figure 1, the quality of the offered fixed broadband varies significantly in the region. Less than half (11 out of 24) of the countries surveyed offer speeds above 10Mbps, and no one offers FTTH. The setback is particularly significant in many countries where the average broadband offer does not exceed 2Mbps. It is also worth mentioning that, on average, supply quality (measured by offered download speeds) is four times higher in OECD countries. Still, the trend is positive and the average supply quality increased by 65% in the region compared to 2010, which, as shown below, entails a significant cut in service costs per Mbps.

The tariffs of fixed broadband services in the region should be evaluated in relation to the restrictions on the quality of the service. On average, tariffs for fixed broadband in the region are three times higher than those found in OECD countries, although, as shown in Figure 2, there are significant variations between different markets. On the other hand, the introduction of low-cost access plans has reduced the price gap with OECD countries in the entry-level supply segment. In this segment, the average tariffs in the region exceed those of OECD by 80%, which represents a significant improvement compared to the 2010 survey (on average, there is a 16% year-on-year reduction in the cost of entry-level plans in the region). Furthermore, countries like Venezuela, Uruguay and Brazil stand out given that they offer basic access plans with tariffs that are similar or below the level of most developed countries. 3

The introduction of low-cost access plans has reduced the price gap with the OECD in the entry-level supply segment.

Another trend that has reduced market entry barriers is the increasing availability of bundled services. They are offered in over half of the countries surveyed (15 out of 24) and provide broadband, phone (generally unlimited local calls) and cable TV services. In less than half the countries (11 out of 24) triple play bundles are available, although in some cases, these bundles include TV services provided by agreements with satellite TV operators. Service bundles can expand the market by reducing additional costs for users who already pay for other services. Nevertheless, as noted by the OECD (2011), it is necessary to monitor these practices as to ensure an ideal combination of stand-alone services and bundle offers.4 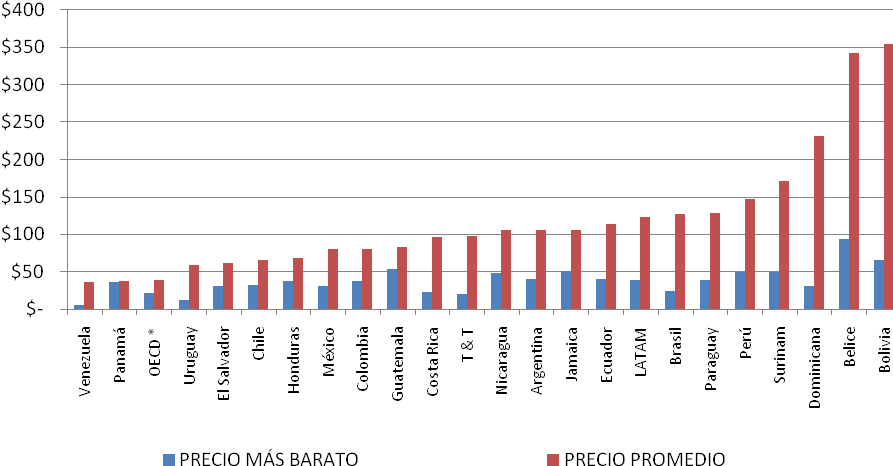 Comparisons based only on tariffs do not take into account quality restrictions of broadband services in the region. To introduce them, the unit of comparison must be the cost of the access service per Mbps download speed, an indicator that considers both price and quality of the service promised. The results are shown in Figure 3. Given that the tariffs are non-linear; this indicator favors the more mature markets where there are higher speed offers (and therefore lower cost per Mbps). Hence we find that the average cost of Mbps download speed for a household in the region is 20 times that of a home in OECD countries. But again, there is significant price dispersion among countries in the region: analyzing the extreme values, the average Mbps cost for a household in Chile is 25 times cheaper than for a household in Bolivia (in US$ PPP). It should also be noted that in countries with very high speed offers (> 100Mbps) such as Brazil and Trinidad & Tobago the Mbps cost is similar to OECD reference values.

The results show a significant dispersion in fixed broadband prices among countries in the region: analyzing the extreme values, the average Mbps cost for a household in Santiago de Chile is 25 times cheaper than for a household in La Paz, Bolivia.

Moreover, the trend shows a remarkable improvement regarding 2010 given that, although nominal tariffs did not present much change, the supply quality improvement has resulted in a 36% reduction in the average cost of Mbps in the region. The improvement is even greater in the case of entry-level plans with a 44% year-to-year decrease in the Mbps average cost in this segment. Even though this trend is positive, broadband price/quality ratio improvement must be accelerated in order to reduce the gap that separates Latin America and the Caribbean from most developed countries.

The causes of the persistent price gap between Latin America, the Caribbean and the OECD, as well as important price dispersions between countries within the region, are manifold and require an extensive discussion which exceeds the scope of this paper. However, some aspects that arise from this analysis are worth mentioning. First, a lack of intermodal competition can be seen (i.e. between different fixed broadband access platforms) in almost one third (7 out of 24) of the countries surveyed. This deficit in investment for alternative access infrastructures must be offset by rules that enable competition among service operators on the same platform (in general the one controlled by the incumbent operator of fixed telephony). However, high prices found in some of the less developed markets show the limited range of these rules in the region.
In these cases, the only alternative to discipline fixed broadband access prices is mobile broadband supply. This requires defining up to what extent are fixed and mobile broadband complementary or substitute products; to be addressed in the next section. It should be noted that in most countries, the operators who offer both services are the same, which reduces the incentives for direct competition between the two platforms.

Price dispersion among countries in mobile broadband services is significantly lower than that observed in fixed broadband plans, indicating higher levels of competition in the mobile segment.

Mobile broadband development is seen as an opportunity to address the competition shortage in fixed broadband services and also expand existing market boundaries. According to ITU estimates (2011) the number of mobile broadband connections doubles that of worldwide fixed connections. This requires analyzing up to what extent are these services substitutes or complementary, and in turn, the comparison of supply characteristics of both services. This comparison has some limitations. Firstly, the promised quality of both services is not strictly comparable. Usually, mobile broadband services are marketed under a single speed promise (in general between 1 and 3 Mbps), which, in many cases, is reduced once exceeded a threshold level of data download. At the same time, the supply of mobile broadband plans has greater segmentation in terms of contract options (prepaid or postpaid), length of service (can be purchased from one hour to a monthly contract), data download and other demand segmentation variables.

Figure 4. Fixed broadband vs. mobile broadband monthly cost (average plans of up to 3Mbps and 1GB download) in US$ PPP, Q2 2011

The results reveal that, on average, mobile broadband services are 25% cheaper than equivalent fixed broadband services. However it is worth noting that the difference is largely explained by the worst performing fixed access markets; while in some of the more mature markets such as Uruguay and Chile the tariff difference between the two platforms is significantly reduced. Taking only the cheapest plans from each market into consideration, the difference in favor of mobile services is extended to 32%. Again, in countries with less developed fixed services -like in most Central American markets- the differences are greater than in more mature markets.

The results reveal that, on average, mobile broadband services are 25% cheaper than equivalent fixed broadband services. Taking only the cheapest plans from each market into consideration, the difference in favor of mobile services is extended to 32%.

In short, there is no doubt that mobile broadband development favors access market expansion by providing an offer of higher segmentation level in terms of type of contract, length of service and download limits, as well as competitive prices regarding equivalent fixed access services. The results show that mobile broadband supply is complementary to fixed broadband in terms of services focused on mobility and prepaid access, and also a substitute due to the pressure it puts on prices in the entry-level segment plans.
Lastly, it is important to point out the increasing segmentation by type of service (chat, mail, social networks and navigation) in the marketing of mobile broadband services. Although these commercial innovations allow the operator to segment the demand and improve traffic management -which in turn reduces deployment and network operation costs-, they also introduce potential competition problems in the value-added services market, and must be monitored to ensure the markets competitive functioning.

1 Of course, even in these countries the relative cost is still higher due to lower income levels in the region. In this regard see Galperin and Ruzzier (2010).

4 The survey was conducted according to OECD guidelines (see www.oecd.org/sti/ict/broadband).

5 Although data download restrictions make some of the mobile broadband services not strictly identical to those of fixed broadband, the ITU criterion was used to establish a 1 GB minimum level of monthly use for the compared plans. See ITU (2011), Measuring the information society. Geneva: ITU.

6 It is noteworthy that Belize and Suriname were excluded from this analysis due to lack of information on mobile broadband offers in these countries.