To gain a better understanding of how children and young people  use their mobile phones across the world, the GSMA is collaborating on a multi-year research project with the Mobile Society Research Institute (MSRI), the research subsidiary of NTT DoCoMo.

The Children’s use of mobile phones — An international comparison 2011 report provides a detailed picture of mobile phone use by children from the age of eight to 18, following research conducted with more than 3,500 pairs of children and parents in Japan, India, Paraguay and Egypt.By investigating children’s use of mobile phones simultaneously in different countries, the research aims to provide the societal effects of mobile phone use by children, and to discover the similarities and differences between markets which are at various stages of development and geographically widespread.The report is sponsored by mobile operators in each country and has already covered more than 15,500 pairs of children and their parents.

To enable year-on-year comparisons, standard questions were posed to children and their parents, including: 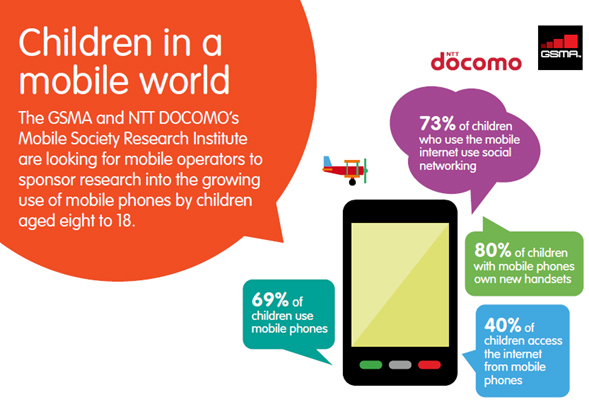 Children around the globe are increasingly confident and passionate users of mobile technology. They are embracing the opportunities provided by mobile phones in way that could not have been predicted a decade ago and beyond that of their parents.This is reflected in some of the research results more prominent and important for Latin America:

74% of parents are concerned about the privacy of their children in relation to mobile phones.
There is no definitive correlation between age or income level and ownership and usage of smartphones showing that it is a phenomenon that has no social barriers.

The GSMA and MSRI are now planning to commence Phase 4 of the project, which will run from February 2012 to November 2012. Intentions for this phase include expansion of the number of participating countries (up to a maximum of 10)
The GSMA, which coordinates the international research project, and MSRI, which is responsible for the scientific analysis, would like to offer GSMA members the opportunity to participate in Phase 4 by sponsoring one or more round of in-country research.
To learn more about the key elements of the sponsorship and get more information about it, please contact Andrea Guajardo.