Digital inclusion in Latin America and the Caribbean 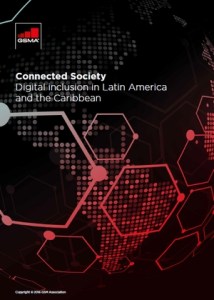 The mobile market in Latin America and the Caribbean is maturing rapidly, with unique subscribers growing on average 5 per cent per year over the last five years and a further 4 per cent average annual growth expected over the next five. However, there remains significant potential to bridge the digital divide by bringing mobile broadband services to the wider population. More than 300 million people in the region still do not subscribe to mobile internet services and the penetration is even lower for mobile broadband (3G and 4G), with nearly 7 in 10 people lacking a mobile broadband subscription.

The coverage gap in Latin America and the Caribbean is relatively small, with only about 10 per cent of the population, or 64 million people, living outside the footprint of 3G or 4G networks. However, 57 per cent or 360 million, of those Latin Americans who have coverage do not use mobile broadband. This indicates a significant gap in demand despite network availability. To understand the reasons behind this weak demand, we have investigated the profiles of non-internet users – who they are, where they live and to which social cluster they belong.