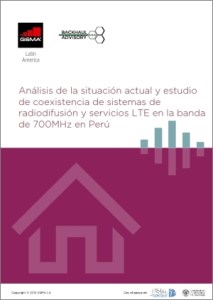 With the switchover from analogue to digital television, the release of the 698 to 806MHz band (known as the Digital Dividend) has increased the viability of this band. Traditionally used by broadcast systems, the band is now available for use in delivering mobile broadband services. This provides advantages for extending the coverage of services and, therefore, for reducing the digital divide and increasing the social and economic benefits for countries in Latin America. As a result, countries such as Brazil, Chile and Panama have licensed the 700MHz band, while Peru, Colombia, Mexico, Argentina and others are in the process of doing so.

In Peru, the Ministry of Transport and Communications (MTC) has divided the 700MHz band into three spectrum blocks of 2 x 15MHz based on the Asia Pacific Telecommunity (APT) proposed band plan, or 3GPP band 28, for the band licensing process expected to take place in the first half of 2016.