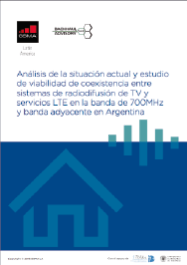 The switchover from analogue to digital television has allowed the release of the 698 to 806MHz band, known as the Digital Dividend or 700MHz band, making it available for delivery of 4G mobile broadband services. In 2014 Argentina carried out the process of assigning spectrum in the 700MHz band by adopting the channel plan proposed by Asia Pacific Telecommunity (APT) – 3GPP band 28 – based on two 45MHz blocks separated by a 10MHz mid-band gap.

Due to reorganisation of the UHF band, at the end of 2015 the 700MHz band was mainly occupied by operators of codified television broadcasting and allocations made to National Universities to broadcast open digital TV. Most of the occupied channels are in the province of Buenos Aires, while other provincial capitals, like Córdoba, do not transmit authorised broadcasts on channels 52 to 69 or adjacent channels 49, 50 and 51.