Making smart cities and IoT a reality in Latin America: a quick guide for decision-makers 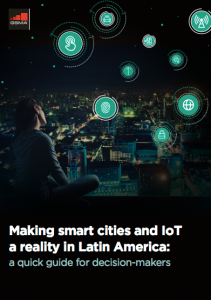 The Internet of Things brings about an enormous opportunity for Latin America. The total revenue opportunity for the region by 2023 is USD 33 billion, according to GSMA Intelligence. However, the overall impact on GDP is likely to be a lot more substantial. For Brazil alone, McKinsey forecasts the impact of IoT by 2020 to be of at least USD 50 billion in the country’s GDP.

IoT solutions will innovate across a great variety of industries, such as energy, healthcare and transportation. They will combine communication networks and existing “off-line” services increasing productivity, diminishing waste and improving citizens’ wellbeing. If governments and policymakers in Latin America want to realize the full benefits of the IoT and help close the technology gap between the region and developed countries they should take action, they should: