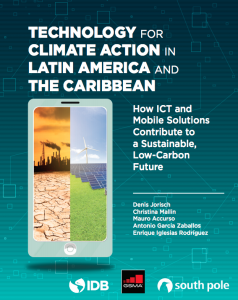 Commissioned by the GSMA and the Inter-American Development Bank (IDB), the report, ‘Technology for Climate Action in Latin America and the Caribbean – How ICT and Mobile Solutions Contribute to a Sustainable, Low-Carbon Future’, analyses how the ICT industry is enabling the reduction of carbon emissions across all sectors – and also tackling its own ecological footprint.

The report, authored by South Pole, also outlines how Big Data and the Internet of Things (IoT) have the potential to be the drivers for climate change solutions. Their application will assist the transport, manufacturing, agriculture, building, and energy sectors, to name a few, in reducing their green- house gas (GHG) emissions and increasing the efficient use of resources while protecting the environment. While there are many provisions in the LAC region that make cities more connected, sustainable, and livable, they also focus on rural areas with a view to more efficient agricultural supply chains and wildlife protection.

Electronic waste (e-waste) generated in Latin America in 2017 amounted to an estimated 4,400 kilotons (kt), and it is expected to grow annually by 10 percent until 2020. Approximately 9 percent of total global e-waste (about 46,000 kt in 2017) is generated in Latin America. The regional ICT industry is taking measures to ensure a sustainable production of devices and network infrastructure, as well a move to prevent negative impacts on the environment as a result of the disposal of e-products. Recycling and reusage decrease the demand on energy, thus resulting in reduced GHG emissions, given that there is less e-waste going to landfills. In 2017, from a total of 4,400 kt of e-waste in Latin America, an estimated 46 kt was directly associated to mobile phones. The uptake of mobile phones continues to rise as they have become ubiquitous, yet they represent only 1 percent of total e-waste generated in the region.

The average amount of e-waste per capita in Latin American countries in 2017 is estimated at 6 kilograms (kg). This amount is in the range of the global average of 7 kg per capita, far less than in other regions, such as Europe or Oceania where e-waste is in the range of 17 kg per capita. Nevertheless, LAC governments should improve recycling and reuse incentives for electric and electronic equipment. To move even further toward a circular economy, it is essential for LAC countries to implement additional policies directed at the ICT sector, an example of which is the extended producer responsibility approach.