Wireless Intelligence: 3G comes of age in the Americas

Rapid adoption of 3G services is driving mobile connections and revenue growth in the Americas region, according to the latest Wireless Intelligence data.

The number of 3G connections in the region is estimated to have hit 100 million at the end of 2011, accounting for about 15 percent of the total and more than doubling from a year earlier. The Americas was the second-fastest growing global region in terms of 3G connections in 2011 (rising 45 percent year-on-year), just behind the Middle East and Africa (52 percent).

According to Wireless Intelligence, mobile operators in the Americas added close to 3 million 3G connections every month on average last year, and this run rate is expected to increase to 4 million 3G additions per month in 2012. As migration to 3G accelerates, growth in 2G GSM connections will slow and could begin retracting by the end of this year. 2G accounted for 85 percent of the region’s connections in 2011 but is forecast to drop to 52 percent of the total by 2016.

The migration towards WCDMA-based 3G has coincided with the region’s move away from CDMA networks. According to Wireless Intelligence, CDMA connections in the Americas declined by 17.5 million between Q4 2009 and Q4 2011 and now account for just 2 percent of total regional connections, compared to 6 percent two years ago. Migration away from these networks is complete or close to completion in many cases. Telefonica closed its CDMA network in Ecuador in December, while its Brazilian arm, Vivo is scheduled to do so in June this year.

3G growth in the region is also having a positive impact on operator revenues. According to Wireless Intelligence, mobile ARPU in the Americas grew by US$0.27 in Q3 2011, bucking a global decline of US$0.02. At Telefonica, the organic revenue contribution from its Latin American division increased by 5 percentage points between Q3 2010 and Q3 2011, offsetting the lower contributions from its Spanish (-2.1pp) and European (-0.2pp) units.

According to new figures from the GSMA, the mobile market in Latin America currently generates an estimated US$175 billion, or 3.6 percent of total GDP, with mobile operators alone contributing US$82 billion in 2010 (1.7 per cent of the total output of the region).

In Q4 2011 the first commercial LTE networks were launched in the region by UNE (EPM) in Colombia, AT&T Mobility in Puerto Rico and Ancel (Antel) in Uruguay. In addition, local operators in 12 regional markets rolled out HSPA+ networks during the second half of 2011.

Strong connections growth and the rapid adoption of mobile broadband services in the Americas are driving mobile revenue growth in the region, and are responsible for rising ARPUs that buck the global trend. Telefonica, for example, reported in Q3 2011 that growth in mobile broadband led to a 31.7 percent rise in Latin American non-SMS data revenue (compared to a 19.6 percent group average), a segment that accounted for 25 percent of total service revenue in the region in the period, up 4 percentage points from a year earlier. This trend can be observed across the Americas and further data revenue growth will be fuelled by the wave of HSPA+ and LTE deployments that are underway. However, to support future growth, operators and regulators will need pan-regional spectrum harmonisation – without which economies of scale and global roaming could be hindered. Brazil, Argentina and Chile are setting the tone for LTE frequency band allocation in the region. According to our latest study, the vast majority of LTE connections in the Americas will be supported in the 2600 MHz band, yet the allocation of additional spectrum in the digital dividend band and the re-farming of existing bands remain high priorities. 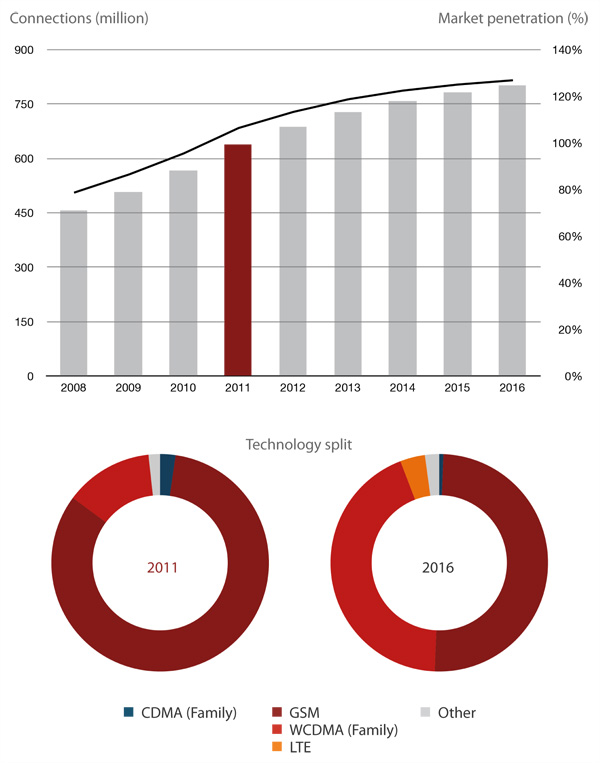