At the end of 2017, the number of mobile subscribers reached the symbolic mark of 5 billion. Mobile is now the most common – and often the only way – that many people around the world access the internet, with 3.3 billion now subscribing to mobile internet services. However, while mobile broadband (3G or 4G) coverage in the developed world is ubiquitous, around 1 billion people are still not covered by mobile broadband networks, with more than 95% of them living in low or middle income countries, typically in rural areas. The reason for this is largely economic: in rural areas the cost of building and operating mobile infrastructure can be twice as expensive compared to urban areas, with revenues up to 10 times smaller. As a result, mobile operators who expand their networks to rural areas often find that they lose money or take a long time to produce a return on investment. While seeking to grow their coverage (and hence their subscriber base) they can struggle to identify locations that could be economically viable.

Figure 1. Landing page of the Mobile Coverage Maps platform developed by the GSMA

In response, the GSMA is pleased to announce the launch of our Mobile Coverage Maps: a tool that will help operators and others to estimate the precise location and size of uncovered populations. These maps will allow users to:

• Gain an accurate and complete picture of the mobile coverage in a given country by each generation of mobile technology (2G, 3G and 4G)
• Estimate the population living in uncovered or underserved settlements with a very high level of granularity (e.g. small cities, villages or farms)
• Search for uncovered settlements based on population size 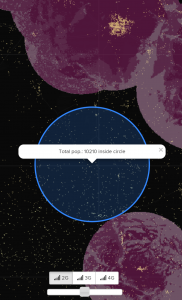 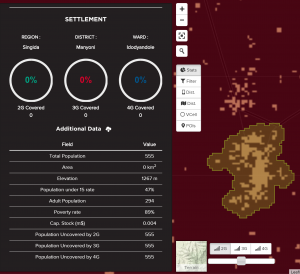 We have developed these maps by collecting data directly from mobile operators and overlaying it with the High Resolution Settlement Layer, a dataset developed by Facebook Connectivity Lab and the Center for International Earth Science Information Network (CIESIN) at Columbia University. This data estimates human population distribution at a hyperlocal level, based on census data and high-resolution satellite imagery. We have further enriched this data by adding socioeconomic indicators and key buildings such as schools, hospitals, and medical centres.

The GSMA Mobile Coverage Maps platform currently hosts two maps, Nigeria and Tanzania, with further countries to be added over the coming months. We decided to focus on these two countries based on the insights of another tool developed by the GSMA – the Mobile Connectivity Index (MCI), which measures the performance of 163 countries against the key enablers of mobile internet adoption: infrastructure; affordability; consumer readiness, and; content and services. The recent update of the Index (see below) shows that infrastructure is the lowest scoring enabler for both countries.

The MCI also demonstrates that coverage is not the only barrier for internet adoption in these two countries. For example, while Tanzania has seen a large increase in its ‘Content and Service’ score (which measures the availability and relevance of internet content and services) over the last couple of years, it remains low by global standards. Similarly, Nigeria’s ‘Consumer’ score (which measures whether citizens have the awareness and skills needed to value and use the internet) will need to rise to ensure that investments in improved mobile coverage pay off. Driving digital inclusion in both countries will require targeted efforts across each of the four enablers.

Our Mobile Coverage Maps can contribute to this effort. Firstly, it will aid operators (and others) to improve the efficiency of their investments. Using the maps, our analysis suggests there are millions of (uncovered) people in Nigeria who could be covered in a commercially sustainable way. This tool will also help other stakeholders – including governments, NGOs, and private companies that rely on mobile connectivity – to strategically target their activity, by helping them identify the locations with existing coverage. Given the numerous ways in which organisations are using mobile technology to improve lives, this promises to have significant social impact.

If you would like to keep up to date on the coverage maps, please get in touch: connectedsociety@gsma.com