The mobile gender gap in Asia: A region of rapid but unequal growth

The GSMA’s Mobile Gender Gap Report 2019 highlighted that there is a persistent mobile gender gap in low- and middle-income countries, where women are 10% less likely than men to own a mobile and 23% less likely to use mobile internet. The scale of the mobile gender gap varies considerably both between regions, and within them. In no part of the world is this more evident than in Asia, which includes both some of the most digitally advanced markets in the world, as well as some of the most digitally unequal.

This blog is part two in a series of regional deep dives covering themes discussed in the Mobile Gender Gap Report 2019. Click here to read part 1. The findings are based primarily on the 2018 GSMA Intelligence Consumer Survey, which has over 20,000 respondents from 18 low- and middle-income countries, including six in Asia.

To some extent this can be explained by the presence of more developed countries in East Asia & Pacific such as China; GDP per capita is a strong predictor of the mobile ownership gender gap in a country, in general the higher the GDP the lower the mobile gender gap (see Figure 1).

However, even when excluding China from the analysis, the gender gap in East Asia & Pacific is significantly below that of South Asia. With countries such as Myanmar exhibiting a similar GDP per capita to that of India, Bangladesh and Pakistan, why is the gender gap consistently so much wider in South Asia? The existence of the mobile gender gap is grounded in a complex set of social, economic and cultural barriers, which manifest particularly strongly in South Asia. 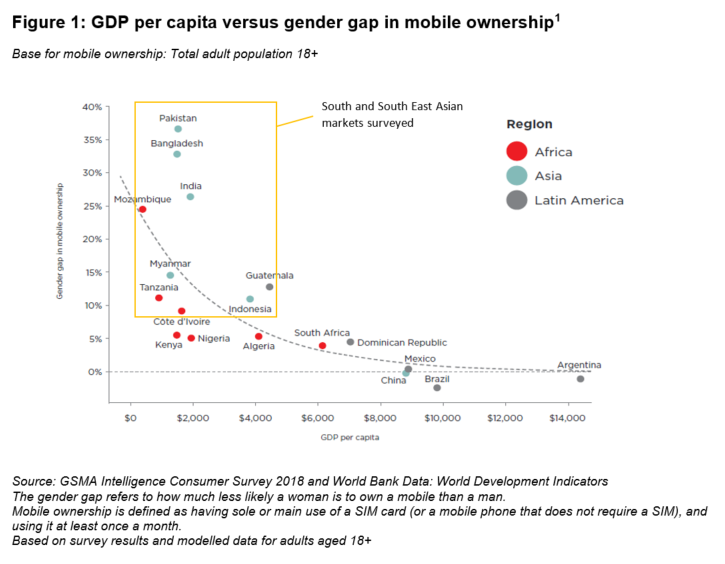 The last few years has seen unprecedented growth in mobile access and use in many Asian markets, though the benefits have not been felt equally by women. Particularly notable have been the changes in Myanmar and India. In Myanmar the liberalisation of the telecoms sector in 2013 was followed by rapid growth in mobile ownership;[2] while in 2013 only 11% of the population owned a mobile,[3] ownership levels are now second highest out of the Asian countries surveyed.[4] Despite this, as seen in Figure 1, the gender gap in mobile ownership remains substantial, with women 15% less likely than men to own a mobile phone.

Similarly, over the past five years India has seen dramatic growth in its mobile market. As competition has intensified in India, data prices have reduced drastically helping drive substantial growth in mobile internet use[5] – 4G growth has been particularly strong.2 Despite this growth India remains one of the most digitally unequal countries in the world. Nowhere is this digital divide clearer than when comparing women and men.

While both Myanmar and India continue to have substantial inequalities in mobile ownership between men and women, the gender gap in India is far wider than economic indicators alone would predict. Although GDP per capita in Myanmar is lower than in India, its mobile ownership gender gap is considerably smaller. It is important therefore to consider how country and region-specific social norms influence women’s access to technology, and particularly underpin South Asia’s disproportionate mobile gender gap. 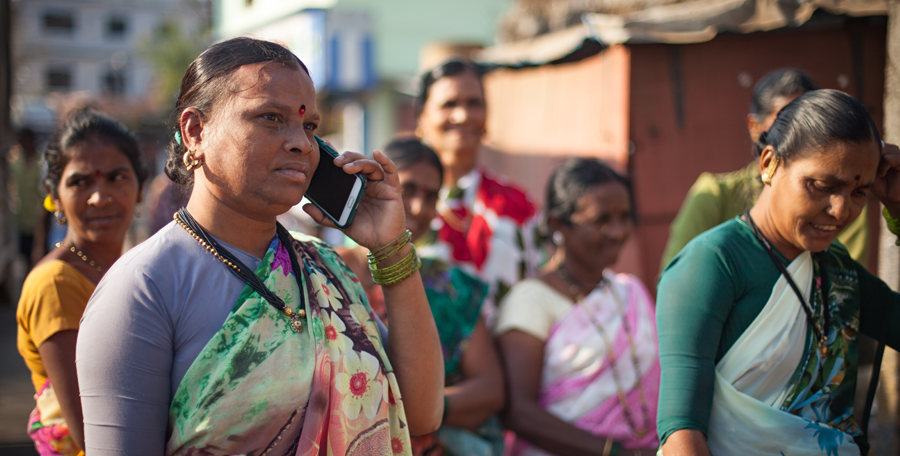 As outlined in research undertaken by the Harvard Kennedy School in India,[6] the barriers to ownership and use of mobile phones can be split into two broad categories – economic and normative – where normative pertains to the existence of wide-ranging, deep-set social norms that inhibit gender equality. Research by the GSMA has found these normative barriers to be particularly prominent in South Asia.[7] For example, women in South Asian countries, including India, are perceived as being vulnerable to corruption by the internet, meaning women’s use of mobile internet can put the reputation of their family at risk. These normative barriers can result in women’s use of the internet being curtailed.[8] 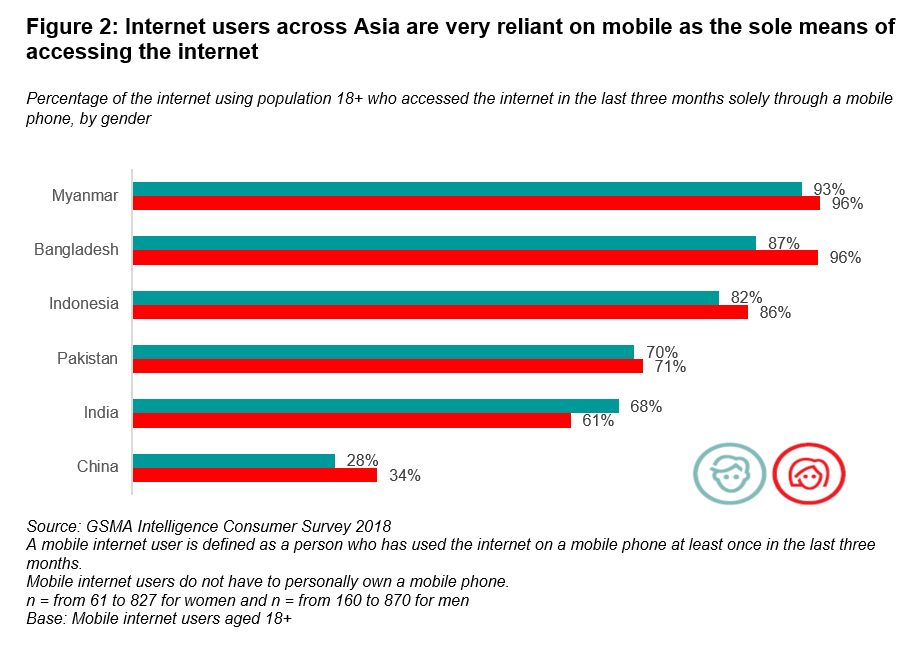 Mobile is proving to be an important driver of socio-economic development in Asia. In 2018, mobile technologies and services in Asia Pacific generated $1.6 trillion of economic value (5.3% of GDP).[9] However, even as mobile grows rapidly in many parts of Asia, women continue to be disproportionately left behind. To ensure that women in Asia are not excluded from the increasingly digitised economies and societies of the future, concerted action must be taken to understand and address the barriers to women’s equal access to mobile where the gender gaps are widest.

For full details on the mobile gender gap across low- and middle-income countries and key recommendations to all relevant stakeholders for tackling the remaining mobile gender gap, see The Mobile Gender Gap Report 2019 and the accompanying Methodology documentation.