How context informs drivers and barriers for value chain digitisation

For those of you who have been following the mAgri programme’s journey over recent months, you will have seen that we have been conducting research across a number of countries (e.g. Uganda and Côte D’Ivoire) to better understand opportunities and existing deployments focused on the digitisation of a variety of value chains and agribusinesses.

The market engagement team have undertaken field research in Malawi and Sri Lanka where we have been working with operators to investigate the opportunities for digitisation, particularly in the tea value chain.

With Malawi being land-locked we can make an ‘island-nation’ comparison with Sri Lanka. In fact, a fuel crisis during a recent trip to Sri Lanka was very reminiscent of fuel shortages, which were all too common occurrences in recent years for Malawians; affecting productivity across all sectors including agriculture. For those less familiar with these two countries, here are some of headline statistics. 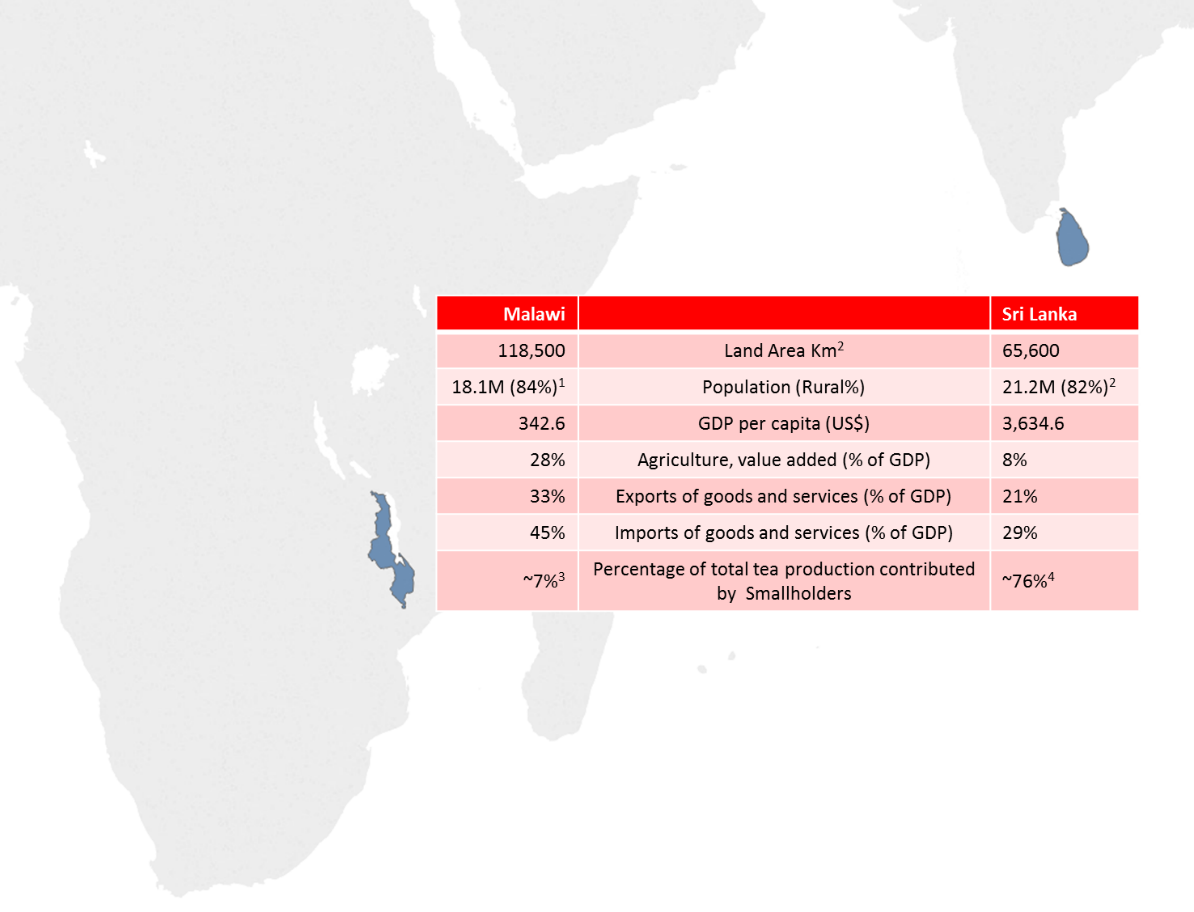 Despite similar population sizes, the difference in GDP is stark with Sri Lanka over ten times larger. However, these are aggregated stats and don’t compare apples with apples or smallholder tea farmers in this case. We wanted to highlight a few comparisons that we have identified in our research and their relevance in terms of barriers and drivers toward digitisation.

The utility of utilities

Hydroelectric generation is the major source of electricity in both countries. We’re yet to meet a Sri Lankan smallholder tea farmer without a home connection to the electricity grid, whereas in Malawi only about 7 per cent of the entire population are connected. Malawian families need to source fuel to cook with, creating pressure on the local environment and further contributing to the effects of climate change – a shared fear among that nation’s farmers, especially with the effect it is having on previously predictable weather patterns. Lack of grid electricity has an obvious impact on mobile phone usage behaviour, with Malawian tea farmers more likely to keep their phones switched off until they really need them and having to rely on expensive solar panels or local entrepreneurs for charging their device.

From the agribusiness’ perspective, running factories on generators is expensive, but reliable electricity brings the cost of sustainable production down considerably; where MNOs use backup generators, costs will be passed on to the customer. Network availability and reliability in often hilly or mountainous areas is a major consideration for digitisation ‘beyond the office’. Factory managers we spoke to have identified that being able to manage data in a near real-time manner would help with production planning and reduce their administrative burden.

For many of Malawi’s tea farmers, tea is their primary source of income, whereas we found that tea generally provides a supplementary income for their Sri Lankan counterparts. In addition, geography and transport infrastructure limits the number of potential buyers to whom Malawian tea farmers can sell their green leaf. This generated an interesting insight into how the farmers engage with the companies looking to buy their green leaf. The Sri Lankan tea farmers have much looser relationships with the agribusinesses where a greater number (and concentration) of buyers exist. This raises interesting questions (which remain unanswered) about the agribusiness’ incentive to invest in digitisation and whether such investments will (positively) affect loyalty, attract new farmers or increase yield among their supply base (watch this space for further learnings in this area!).

A common finding across both countries is that it is very difficult to find young, tech-literate farmers. The reality is that farming is not viewed as an attractive undertaking and that alternative forms or employment (e.g. minibus drivers in Malawi or working in garment factories in Sri Lanka) are deemed more appealing (garment factories are able to offer better privileges to workers in the form of housing, transport and meals). This results in a need for services to cater for a more mature and less tech-savvy user base, who might ultimately rely on assistance from their family in using their phone or understanding the messages received. The migratory drain on manpower also means that it is harder to find labour during peak harvest seasons, affecting the quantity and quality of farmer yields.

While many of these findings are not exclusive to these two country contexts and many more factors could be compared, it is interesting to note that even though similar barriers and drivers exist in quite different contexts, the value proposition offered by MNOs and agribusiness needs to be carefully adjusted for each market context.

This project was funded with UK aid from the British people.