Beyond access: the need for deeper thinking about driving usage and adoption of the mobile internet

At the end of 2016, 3.5 billion people, or just under half of the world’s population, were using the internet. While the number of internet users has trebled in a decade, it still means that billions of people across the world are not benefiting from access to a wealth of life enhancing information, entertainment and services.[1]

The GSMA’s Connected Society team – of which I am a part – works with our members to develop commercially sustainable solutions that ensure that remote broadband coverage can be extended to as many people as possible. Recently this has involved working on a network sharing pilot project in Tanzania with 3 of our members in Tanzania (Airtel, Tigo and Vodacom) to extend rural coverage to over 70,000 people (a video explaining the project can be found here). While this work is critical, we sometimes speak to people who believe that is the only problem that needs solving. Others recognise that the affordability of devices and data packages are also a big issue, particularly given that 766 million around the world live in poverty according to the World Bank. [2]

However, some data from last year’s GSMA Consumer Survey – which surveys people on mobile related issues –demonstrates that increasing internet access is far more complicated. One question on the survey asks whether people have ever used the internet. Surprisingly, the results showed that many smartphone owners around the world have never used the internet. In certain countries, the internet ‘holdouts’ represented more than 1 in 5 smartphone owners: Egypt (20.1%), India (22.5%), DRC (23.2%), Ethiopia (26%) and Myanmar (34.7%). This is a puzzling finding, given that smartphones are a device designed and optimised for accessing the internet. 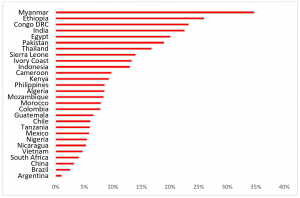 Moreover, many people around the world currently struggle to gain access to a smartphone in the first place. At present, only 32% of connections in Least Developed Countries are smartphones (compared to 68% in developed economies).[3] While market forces are bringing prices down, even the cheapest smartphones are out of reach for many and will remain so for some time. In Kenya, the 2017 average smartphone selling price is expected to drop from around US$118 today to US$109 by 2020. As a result, over the last few months we have been investigating innovative business models from around the world that address this. The report, Accelerating affordable smartphone ownership in emerging markets, has been released this week.

Why then, would the group identified by the survey, who have overcome two of the most obvious barriers to becoming an internet user – access and affordability – want to own a smartphone? Previous research we have done suggests that for many, owning a smartphone is a mark of social standing. As a result, a significant number of users (mainly men) are willing to buy a smartphone even if they cannot properly use it (or see no reason to do so). [4] For a number of our members, this represents a serious issue, with many reporting that a significant percentage of their smartphone user base consume little or no data.

This reinforces the key message of the Connected Society programme: that getting those currently unconnected to come online is about far more than access. Indeed, 67% of the 3.82 billion people currently not using the mobile internet are already covered by a mobile broadband network.[5] Rather, a number of interrelated issues have to be solved, around affordability, digital skills and relevant content. Over the last few years, a number of organisations have arrived at a similar conclusion, including McKinsey, Huawei, Facebook, the World Economic Forum and Ericsson. [6] While agreement exists around the issues we need to overcome, there is a clear need for a more detailed understanding. As a result, over the coming months we will be taking a detailed look at the above issues.

Firstly, we recently completed some qualitative research in Bangladesh, India, Pakistan and Sri Lanka investigating the barriers and triggers of mobile internet use. This month, we will be doing similar research in Tanzania and Cote d’ Ivorie. By gaining a detailed comparative understanding of internet users and non-users, we are aiming to uncover some commercially viable opportunities for mobile operators (and other ecosystem players) through solving key consumer pain points. Later this year we will be bringing our members in Bangladesh, India and Tanzania together with the wider ecosystem to identify the kinds of collaborations that are going to make this happen. Finally, we are excited to be hosting a small side session at m360 event in Tanzania next Wednesday 12th of July- ‘Catalysing mobile internet use in Africa: new models to drive adoption– where organisations including Google Android, Millicom, Wikipedia and Research ICT Africa will share insights before participants delve into these issues in a series of breakouts.

In all these areas, we are eager to hear from you. If you are interested in learning more about our upcoming research, our work in Bangladesh, India and Tanzania or are interested in attending our session at the m360 event next week, then please get in touch.