Mobile Connectivity Index 2018: Analysing the state of mobile internet connectivity across the world

At the end of 2017, 3.3 billion individuals were connected to mobile internet, with 300 million new subscribers added in a year. Nonetheless, more than 4 billion people are yet to be connected. [1] The GSMA Connected Society programme works with our members and other interested stakeholders to increase access to and adoption of mobile internet for the undeserved.

One of the key tools we use enrich our understanding of the challenge is the Mobile Connectivity Index (MCI). Originally launched in 2016, it rates 163 countries on how advanced their mobile internet ecosystem is (expressed as a score between 0-100). The overall score is made up of four enablers, representing – what are commonly agreed to be – the key determinants of mobile internet access and usage: infrastructure, affordability, content and services, and consumer readiness. These are themselves built upon 35 discrete indicators. [2]

A unique and comprehensive tool

Over the past few years, a number of similar indices, all concerned with connectivity, have emerged. [3] The MCI however is unique in that it is focused solely on mobile technology. This matters as mobile is now the primary way in which internet users in low- and middle-income countries are coming online. A mark of its distinctiveness is the fact that more than half the indicators that make up the Mobile Connectivity Index are not available or used in other similar indices.

When we launched the Index in 2016 it included 134 countries, representing 95% of the world’s population, a figure that has risen to 163 countries (and 99% of the world’s population) today. We have also expanded some of the enablers. For example, the ‘Content and Services’ enabler now includes data on the number of mobile applications developed in a particular country and whether they are available in local languages, which better represents local relevance.

Moreover, the latest update means that we now have 4 years of data (covering 2014-17), meaning that countries’ progress can be examined over a time-period long enough to see material changes in scores.

1. The average mobile connectivity index score has steadily increased year on year, from 52 in 2014 to 60 in 2017. The Infrastructure enabler experienced by far the largest improvement in this period, rising from an average of 36 to 50, driven in part by significant improvements in coverage (e.g. global 3G population coverage increased from 75% to 87% over the same period). By contrast, the Affordability and Consumer Readiness enablers were largely flat (reflecting the fact that improvements in these areas are generally relatively slow). Despite the large increase in the Infrastructure enabler, it remains the lowest scoring of the four and deploying last mile infrastructure presents a serious economic challenge for operators. For this reason, the Connected Society Programme have just launched an Innovation Fund in this area, which will test the effectiveness of innovative solutions in areas like backhaul, energy and base station technology.

Figure 1: Global Index and enabler scores (average across all countries) 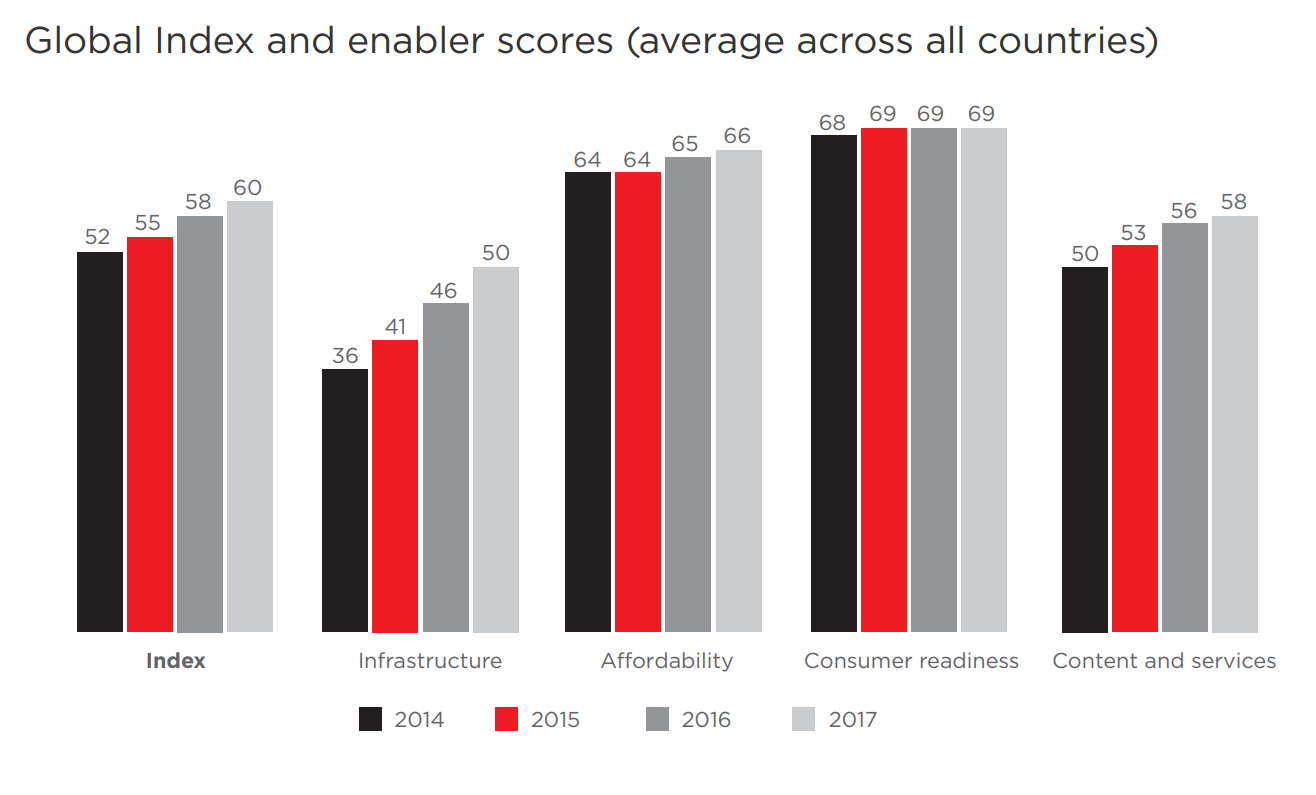 2. The most improved region across the four years was Asia Pacific. The relative position of the five main regions has remained stable: North America (with an index score of 78 in 2016 which increased to 83 in 2018) and Western Europe (76>82) remain the regions with the highest Index scores, while Sub-Saharan Africa (32>38) continues to have the lowest. The most improved region was Asia-Pacific (50>59), largely due to significant improvements in the scores for its Infrastructure and Content and Services enablers. Indeed, three of the top five most improved countries are in Asia: Myanmar, India and Bhutan.

3. Based on current trends, almost 50% of the world’s population will still be offline by 2020 and 40% will still be offline by 2025. Achieving universal internet adoption requires an acceleration of efforts by the mobile industry, policymakers and the international community. The key areas they should focus on are: improving rural coverage, easing operator access to affordable spectrum, reducing sector-specific consumer taxes, building literacy and digital skills, and improving female digital inclusion.

If you are interested in learning more, including exploring a wealth of freely available data on your country, region or area of interest, please visit the updated Mobile Connectivity Index.

In addition, we have just released a new report to accompany the updated MCI: State of Mobile Internet Connectivity 2018. In the report, for the first time, data from the Social Progress Index is used to examine the impact that increased mobile usage has on social impact.

Finally, those interested in the methodology used to create the Index can find an updated report here.

If you have any questions about the MCI, please get in touch.

[1] GSMA Intelligence (Q4, 2017)
[2] A number of organisations have agreed that these are the principal barriers to digital inclusion, including: McKinsey, Huawei, Facebook, WEF, Ericsson and GSMA. See more in: USAID, Connecting the Next Four Billion (Feb 2017)
[3] E.g. ITU’s ICT Development Index, the WEF Networked Readiness Index and the Alliance for Affordable Internet Affordability Report