This blog post was written by Chris Li, who joined the GSMA in June 2018 as Operator Outreach Director. He is leading the expansion of the GSMA Blacklisting service into new territories. Here he reflects on progress thus far, and what more needs to be done to expand IMEI Blacklisting even further.

Mobile devices continue to play an ever more central role in our lives, providing the means by which we conduct many of our most important and personal daily affairs. Because of this, the prevention of their theft has become vital. The mobile industry has a natural interest, as well as a moral duty, to help to reduce device crime.

The GSMA operates an important global IMEI blacklisting service, whereby its operator members share their own black lists (lists of devices that have been reported by their customers as lost or stolen) to a global database in order to identify and block stolen devices across multiple networks and national borders. Operators can choose to refuse service to an illicit device regardless of where in the world it ends up. This ‘lost and stolen’ data is also accessed through the GSMA Device Check platform by border agencies, law enforcement and businesses such as pawnbrokers, device recyclers and insurers to instantly check if a device has been reported as lost or stolen.

There are at present 124 operators participating in IMEI Blacklisting, across 44 countries, and by the end of Q3 2018 they had between them blacklisted more than 28 million devices over the previous two years. In Latin America, activity has centred around the We Care campaign, through which leading operators commit to exchanging their blacklist data via the IMEI Database. We Care has now launched in 15 Latin American countries – most recently in Paraguay, with the support of the National Telecommunications Commission. This latest launch brings Latin America’s total industry participation to 52 operators across 18 countries, delivering IMEI Blacklisting to almost all countries in the Americas.

The GSMA is now working to widen participation even further, with a particular focus on Africa and Asia. At Mobile 360 Series – Africa in July we held discussions with 20 operators and regulators on how to advance participation in the IMEI Blacklist. At the Mobile 360 event in Moscow in October, which attracted influential attendees from over 30 countries, key stakeholders met to share developments in cooperation on IMEI Blacklisting. Moreover, the International Association of Chiefs of Police (IACP) recently resolved to encourage expansion of GSMA IMEI Blacklisting, including the blocking of stolen phones regardless of the country of origin.

Over the last few months there have been new commitments to participate made by operators in countries like Qatar and the Bahamas; productive talks have also taken place with stakeholders in a range of Asian and African countries including India, Indonesia and Uganda. According to GSMA Intelligence, between them, these five jurisdictions account for nearly 1 billion connections.

The mobile industry continues to focus on its contribution to the UN Sustainable Development Goals, and an important part of this is to promote the legitimate trade in mobile devices by fighting the black market through its bottom line. The CTIA recently announced that a million devices had been checked in a single year through its Stolen Phone Checker service (which is powered by GSMA Device Check). This coincided with a nearly 60% drop in devices being reported stolen, which demonstrates that the industry is on the right track in the United States. The objective is to replicate this success in Africa and Asia, and we very much hope to attain the level of participation to make this a reality.

If you would like to learn more about IMEI Blacklisting or GSMA Device Check, get in touch. 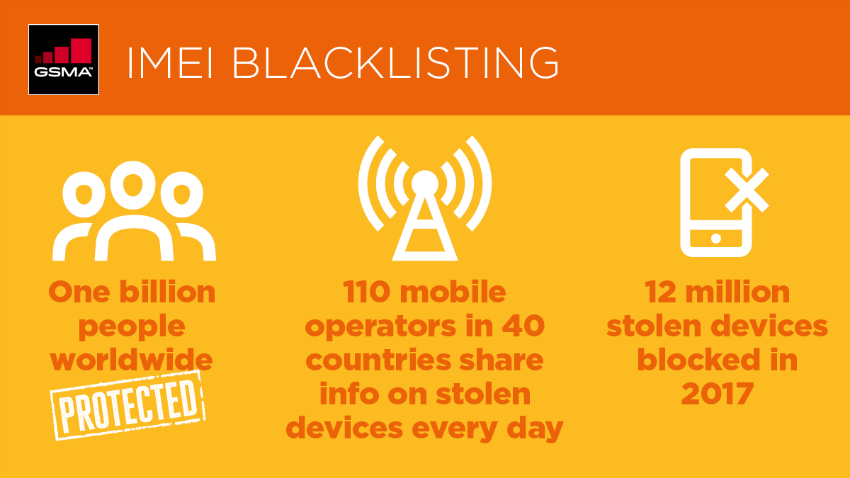