How Africa is driving progress in global mobile internet connectivity

In 2018, for the first time, more than half of the world’s population was using the internet. For many mobile is the primary – or only – way to get online. Last year alone, almost 300 million further people connected to mobile internet. The extent and progress of mobile internet connectivity is explored in detail in The State of Mobile Internet Connectivity Report, launched today at the GSMA Mobile 360 Africa event.

One factor driving this increase in mobile broadband coverage was the range of innovations in network infrastructure that were tested and deployed across the continent. Innovation has considerable potential to reduce the cost and difficulty of delivering mobile broadband to even the hardest-to-reach populations online (a priority explored in a further GSMA report launched at Mobile 360 Africa, focusing on innovations in rural infrastructure). 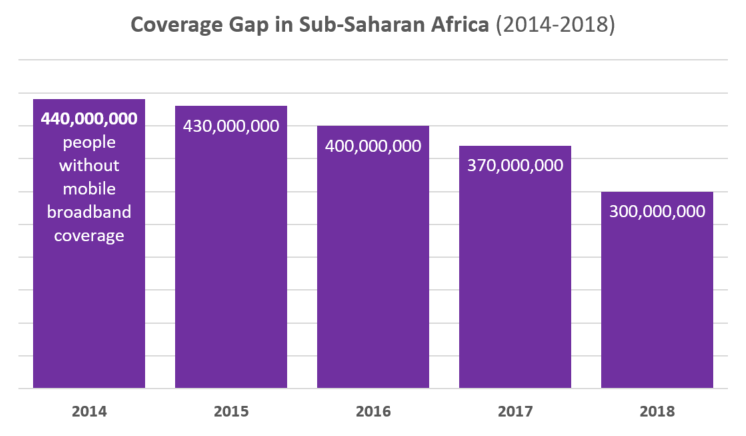 Overall, these improvements in infrastructure align with wider and considerable progress that has been made in Sub-Saharan Africa in 2018 (building on strong foundations established in previous years). This progress can be tracked through a range of national improvements in scores in the Mobile Connectivity Index (as showcased in the GSMA Mobile Connectivity Index web tool).

However, challenges remain across the continent as well as globally. Around the world, 750 million people remain outside of mobile broadband coverage and 40% of these live in Sub-Saharan Africa.  A further 3.3 billion people worldwide live in areas with coverage, but do not use mobile internet. Almost half a billion of these people live in Sub-Saharan Africa. The reasons for these gaps are complex, and extend beyond deploying the infrastructure that has been a particular driver of the progress discussed above.

The State of Mobile Internet Connectivity Report highlights that a lack of digital skills and literacy – and a large gender gap regarding device ownership and access – are significant barriers to mobile internet adoption across the continent (as well as in South Asia, and the Middle East). Beyond these factors, affordability of handsets and data remain key challenges.

Sub-Saharan Africa has the least affordable data globally (75% of countries in the region remain above the target threshold of 2% of monthly income for 1GB of data), although significant improvements have occurred in the past few years. Similarly, the number of smartphone connections continues to increase across the African continent – however the cost of an entry-level internet-enabled device is equivalent to nearly 400% of the monthly income of the poorest fifth of the population (a challenge globally, but a particularly stark figure for the continent).

Despite these challenges, the progress made in the past year with connecting the unconnected, and continued efforts to drive down the cost of data, improve digital skills and understanding, and close the mobile gender gap, are considerable. Although led by operators, this success has been founded on effective collaboration between governments, the private sector, civil society, and international development institutions. Beyond the above, further drivers of this progress have included enabling policy and regulatory environments, increases in locally relevant content, and targeted interventions to close the digital divide.

Mobile is the primary means of internet access across low- and middle-income countries and these efforts have provided millions more people with the opportunity to benefit from the transformational potential that internet access and use can enable. Further work, leveraging the recommendations made in the report, could accelerate the positive role that mobile technology and mobile internet can play for individuals, economies, and societies across the continent.