Propelling Women in Tech across emerging markets: Our reflections on female entrepreneurship

In 2017, we published a blog highlighting the socio-economic benefits brought by female entrepreneurs to their local economies. Borrowing the words of Warren Buffet, to exclude women from the ecosystem would be ‘a waste of human talent’ – pushing ‘50% of the population…into the corner’. Since announcing our latest additions to our portfolio of start-ups in December 2018, the GSMA Ecosystem Accelerator team has been reflecting on the progress made in this crucial area, and what remains to be done.

“#WomenInTech”: The situation and opportunities

Today, women are still seriously under-represented and under-funded in the technology ecosystem worldwide. The ‘pipeline’ of female founders and senior management remains low and leaky. Though women-founded start-ups deliver twice as much per dollar invested as those founded by men worldwide, women-led enterprises collected less than three per cent of global venture capital in 2017 according to the IFC’s report, Moving Toward Gender Balance in Private Equity and Venture Capital. In Sub-Saharan Africa, 6% of funding only was received by female-led businesses and in South Asia the figure was 8%. Women are significantly under-represented in the leadership of companies that receive Private Equity (PE) / Venture Capital (VC) funding, as well as among the investment decision-makers at PE and VC firms. According to the same report, 68% of the leadership teams at the PE/VC firms researched were in fact all-male, 12% were male-dominated and only 19% were gender-balanced; 1% were all-female.

It is not all doom and gloom though. Research conducted by Women in Africa (WIA) and Roland Berger focusing on the Total Early-Stage Entrepreneurial Activity (TEA) shows that the number of African women involved in founding start-ups is estimated to be at 24%. Moreover, ‘female entrepreneurs in Africa contributed between $250 billion and $300 billion to African economic growth in 2016, which is equivalent to about 13% of the continent’s GDP’. The Mastercard’s Index of Women Entrepreneurs (MIWE) 2018 delves into statistics on Women Business Owners. It highlights that some lesser developed economies globally such as Ghana, Uganda and Vietnam have higher Women Business Ownership rates than their developed global counterparts, between 31 to 46%. Several Asian countries, namely Singapore, Thailand and Bangladesh have a Women Business Owner rate between 25 to 30%. The idea that women in emerging markets are extremely opportunity-driven is further developed in the 2019 Global Entrepreneurship Monitor report. In Thailand, Indonesia, Madagascar and Angola, the TEA rate between women and men is equal. Many female entrepreneurs in emerging markets are often their family’s main ‘bread-winner’.

Map from ‘Women in Africa Entrepreneurship: a path to women empowerment’, WIA and Roland Berger

Women in Tech: The GSMA’s approach to addressing gender inequality

As a programme, we thought we would share the start-up application statistics on female entrepreneurs from Asia Pacific and Africa. Among the top 200 start-ups from Asia Pacific and Africa that submitted their applications for the third round of the GSMA Ecosystem Accelerator Innovation Fund in 2018, only 8% (fifteen companies) had all female-team founders. That being said, the ratio for this third round was much higher when looking at start-ups with gender-diverse founding teams (at least one woman co-founder) and the figure reached 44%. This marked a 19% increase since the second round (2017) of applications and a significant augmentation of 31% since the first round (2016). Looking at the applications received from start-ups with women in their top management, the ratio for Round 3 climbs from 44% to 85%.

Statistics from the GSMA Ecosystem Accelerator Innovation Fund Rounds 1, 2 and 3

The conversation at the GSMA on the need to tackle gender inequality remains a top priority. In 2016, the GSMA became a co-founder of the global EQUALS partnership, alongside the International Telecommunications Union, UN Women, the International Trade Centre, and the United Nations University, as part of its commitment to achieve global, digital gender equality. Back in 2017, Mats Granryd, Director General at the GSMA, announced the mobile industry’s commitment to the Sustainable Development Goals (SDGs), with mobile operators all over the world showing a significant drive for achieving greater gender equality across the mobile sector. In 2018, he was appointed to be a member of a new United Nations Task Force to advance the UN’s SDGs. Furthermore, the GSMA’s Connected Women programme – active since 2010 – has called to action mobile operators working to help close the gender gap in mobile internet and mobile money services. As of June 2019, 38 operators have made 53 commitments to reduce the gender gap in their mobile money and/or mobile internet customer base across Africa, Asia and Latin America. This blog shows mobile operators that have made a Connected Women Commitment have already reached over 12 million women. At MWC Barcelona 2019, the GSMA Women4Tech Summit continued its commitment to reduce the gender gap in the mobile ecosystem. In April 2018 and 2019, the GSMA participated in a series of global events to celebrate the annual ITU International Girls in ICT Day aimed at encouraging and empowering young women to explore career opportunities in the science, technology, engineering and mathematics (STEM) areas whilst enabling companies to reap the benefits of greater female participation in the tech sector. In June 2019, the GSMA has adopted the UN Women’s Empowerment Principles as part of its commitment to promoting gender equality and the empowerment of women in the workplace, marketplace and community.

To raise awareness within our portfolio, during the GSMA Ecosystem Accelerator third annual Bootcamp in February 2019 we included a panel discussion on ‘Equality in Tech’, focusing on how start-ups address gender inequalities and subsequently tackle UN SDG 5. The panel of four start-ups – Coliba (Côte d’Ivoire), Eneza, oDoc and Sehat Kahani – included companies with female-only and male-only founders and teams of mixed senior management. oDoc for instance, a start-up providing mobile-based telemedicine services in Sri Lanka, called out the importance of providing tech opportunities for girls still at school and encouraging careers in STEM. A key takeaway was the need to recognise that the issues of inequality go beyond technology. It is deeply ingrained in the fabric of society and to progress, all men and women alike must be focused and take responsibility to eliminate inequality.

For International Women’s Day on 8 March, 2019, together with the GSMA Mobile for Development Utilities programme, we highlighted some of our female founders in this blog and asked them to share some of their top tips for other women navigating the business world. Dr Sara Khurram, CEO and Co-Founder of Sehat Kahani, a telemedicine service by women doctors to marginalised populations in Pakistan, advised on why it is important to have more women as leaders in the tech sector. In her opinion, “The majority of women in our part of the world never work because they are scared of that ‘first step’, that first time that they leave their house, their children, cultural barriers and taboos, to do something for their ‘own being’. We need more women leaders to motivate more women to take the ‘first step’ to change their fate and the fate of our future.” As of June 2019, Sehat Kahani has over 30,000 users – 80% of whom are women and impacts over 150,000 people directly and indirectly. Sehat Kahani has continued to empower female medical practitioners by creating employment and unlocking over £50,000 of income for female doctors, nurses and community health workers.

Photo at GSMA Bootcamp – Panel Discussion on Equality in Tech

Project breakthrough: How the mobile industry is supporting women working in tech across emerging markets

Though more could always be done, the mobile industry is playing a crucial role in addressing the imbalances women face in a digital world. Mobile operators have designed programmes to empower women entrepreneurs, for instance, Vodafone’s F-LANE (a global seven-week accelerator) and Sonatel’s Linguère Digital Challenge initiative that recognise women in ICT. 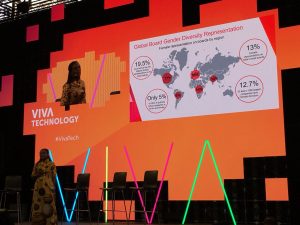 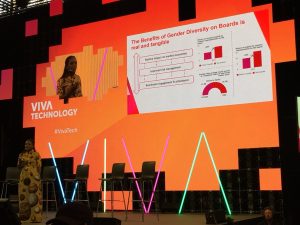 The mobile ecosystem as a whole has a huge role to play. Organisations have an opportunity to increase gender diversity by hiring more women, developing junior female employees and advocating career growth and learning opportunities. For instance, oDoc have recently hired a female Head of UI/UX and Lynk provides equal training opportunities to their female and male users, who are part of the informal sector and otherwise would not get training opportunities. Companies have an opportunity to leave unconscious bias at the door and involve women in the strategic decision-making process. The benefits that a diverse workforce brings is well documented. Studies have shown that companies with homogenous workforces are less productive, make products designed mainly for men and can have less return on investment (ROI) compared to companies with a more diverse workforce. In short, a start-up in emerging markets that invests in its social capital will reap rewards. Not only will it gain employees with a more diverse set of skills, but through this, it will have a better understanding of its customers, and take better decisions.

Start-ups can also play a unique role in bridging the inequality gap as they can inspire the next generation. For instance, in the hiring standards they practice (such as removing names and bio photo from CVs), bringing on interns from diverse backgrounds and by going back to schools and universities, they can prove that STEM roles are available to women, just as much as they are to men. The real breakthrough of gender disparity will take all players of the tech ecosystem to remove obstacles and fully empower more than 50% of the population.

We remain committed to addressing this issue in the way we design our activities, and support entrepreneurs, mobile operators and other ecosystem players across Africa and Asia Pacific. We are always open to feedback and new ideas, please do feel free to reach out to us should you have thoughts or recommendations. 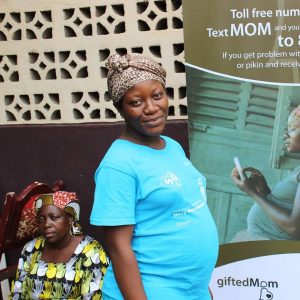 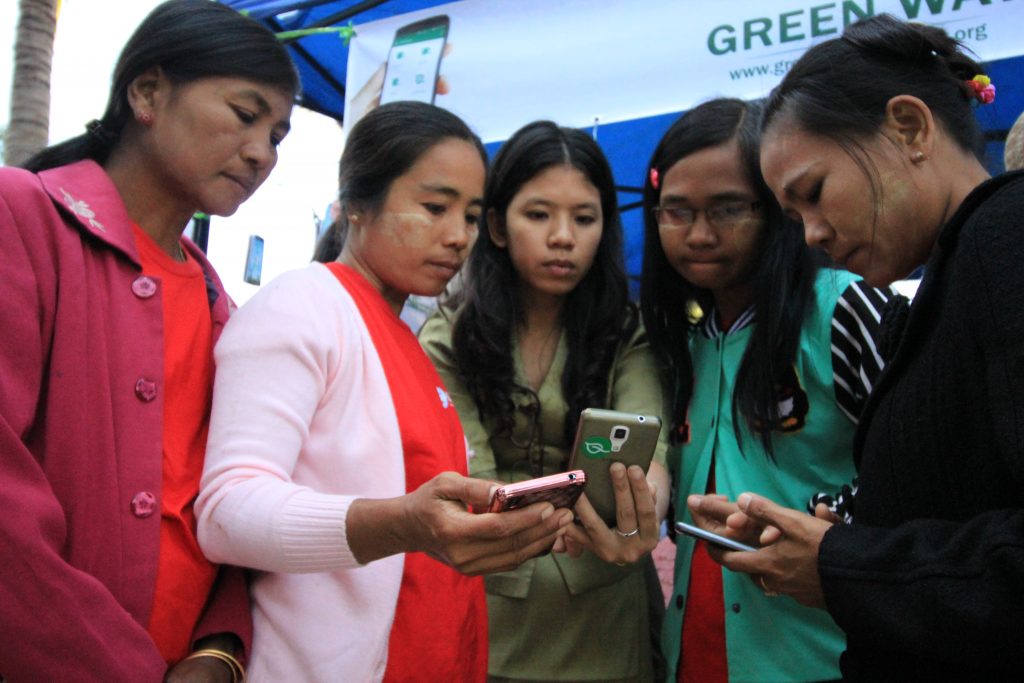