SGP.18 Security Evaluation of Integrated eUICC based on PP-0117

Could eSIM Revive Roaming Revenues? The travel industry is shifting from pandemic emergency response to gradual re-opening in 2021. ...

The software shift from physical SIM card to a digital eSIM download is set to transform the mobile industry, offering new business ...

“Experience is the new Product” in this digital age, and successful Internet companies have executed on this theme by providing elegant ...

Almost a year ago exactly, Apple released the first major smartphone with embedded SIM capability. And while early adopters ogled over ...

Michael Moorfield, Director of Product, Truphone The IoT is well and truly alive. But a few key factors are holding it back. Security ...

Seminar: eSIM – From specification to live products The GSMA presented the 4th edition of the eSIM Seminar at Mobile World Congress ...

The phrase ‘security and interoperability audits’ usually sends engineers screaming into the dark; but in the case of eSIM ...

The eSIM has arrived. For mobile network operators (MNOs) everywhere, the benefits of this revolutionary technology are no longer a ...

It is not far-fetched imagining trillions of devices at every point of intelligence around the world, all hyperconnected to the Internet of Things (IoT). There certainly is no shortage of IoT use cases. We already have technology for connecting devices on a wireless sensor network, in turn connected through a gateway to an IP-based network. So, what’s holding back faster progress?

Silicon implementations will be at the heart of this new approach. Just as cores and chips ignited explosive growth in mobile devices, on-chip integration will drive the IoT into new territory.

Operators can Double Down

This growth hinges on a secure, flexible, scalable digital subscriber model for cellular-connected devices. If IoT devices can be provisioned much like mobile devices, monetizing IoT devices is straightforward for operators.

The Universal Integrated Circuit Card, or UICC, has served the mobile industry for decades. The subscriber identity module (SIM), a function within a UICC, became ubiquitous in GSM and newer CDMA phones supporting LTE. A programmed SIM contains network-specific information and a subscriber’s international mobile subscriber identity (IMSI), allowing a phone to join a network securely.

For M2M modules where there is no need to change a SIM card, embedded UICC (eUICC) provides a MFF2 chip form factor soldered-down to a board. eUICC added the ability to hold multiple SIM profiles, and to update them over-the-air. This means eUICC-enabled devices can switch from network to network over their extended lifetime, avoiding obsolescence if networks are sunsetted. 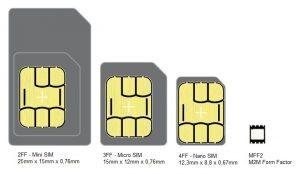 New low-power, on-chip integrated SIM (iSIM) technology completes the picture for MNOs looking to tap into the IoT. An iSIM approach allows a connected device to go anywhere in the world and join an IoT network, securely and cost-effectively. It enables a common set of operating principles MNOs already use, including:

Leveraging cellular connectivity and iSIM technology, MNOs can effectively “double down” on their investments in mobile infrastructure and people. This can bring tremendous numbers of devices onto the IoT quickly. Use cases that were priced out due to infrastructure issues, such as agricultural, automotive, or anything requiring mobile or rural coverage, now become feasible. When more IoT device designers incorporate iSIM technology, deployment and lifecycle support become easier as the ecosystem grows.

Several low-power wide-area (LPWA) networks exist today – mostly within closed ecosystems. While they each address connectivity for their preferred use case, they force infrastructure choices. With several competitors offering proprietary protocols, interoperability between these networks at the edge becomes a problem. Today, islands operate on various LPWA technologies rather than forming a true IoT.

Creating a Secure Enclave in SoCs

iSIM technology embraces the “secure enclave” concept, implemented on-chip using semiconductor and software IP. This secure enclave is fully partitioned from the rest of the SoC, with self-contained processing and encryption elements running a secure operating system. The iSIM approach is at least as logically secure, and more physically secure, than using a discrete SIM outside an SoC.  A secure enclave on-chip has several other strong benefits:

As the last piece in the cellular-grade IoT puzzle, iSIM technology brings everything together. It is more cost-effective, both at the device level and in TCO terms. It provides a totally secure identity that enables remote provisioning, subscription management, and orchestration for MNOs. With standardized platform elements, interoperability is enhanced.

For more on the Arm announcements, visit:

Once an end-to-end cellular-grade IoT device connectivity solution exists, we can bring what could be trillions of new IoT devices into play. Expanding the iSIM ecosystem is a major step in completing the cellular-grade solution. iSIM provides a solid technological implementation and enables a business model that allows rapid deployment and effective lifecycle management.