By Cat Morais and Ferdous Mottakin

Practical Action is a non-governmental organisation (NGO) that leverages technology to challenge poverty in developing countries around the world. Through technology, Practical Action enables the sustainable development of practical solutions, innovative skills and knowledge among poor communities.

In March 2018, The GSMA Mobile for Development (M4D) Utilities programme awarded a grant to Practical Action and Robi Axiata, the second largest mobile operator in Bangladesh, to develop and launch a digital service platform, called 1Service, through which customers can request and pay for water and waste management services at Satkhira and Magura municipalities.

The Satkhira and Magura municipalities are located in the Southwest coastal region of Bangladesh, an area that is extremely vulnerable to high groundwater salinity, which leads to increasing levels of arsenic in the water, causing long-term public health issues, as exposure to arsenic is associated with several types of cancer and heart disease.

The three large water treatment plants, which manage 100 kilometres of piped water network, are the only reliable source of water for city dwellers at Satkhira municipality. On a daily basis, Satkhira municipality supplies water to over 112,000 people. For the municipalities, water bill processing requires substantial amounts of effort and time. Customers wait two weeks to receive a physical bill, and then have two weeks to pay the bill through one designated bank branch before the next month. Running the piped water service costs the Satkhira Municipality over £9,600 per month. But due to inefficient billing processes, revenue collection covers less than half of the cost – an average of £8,000 per month, preventing the utility from investing in maintenance and expansion.

1Service is a cloud-based platform which provides timely water bill notifications to users and enables customers to pay bills using a smartphone or any RobiCash agent. 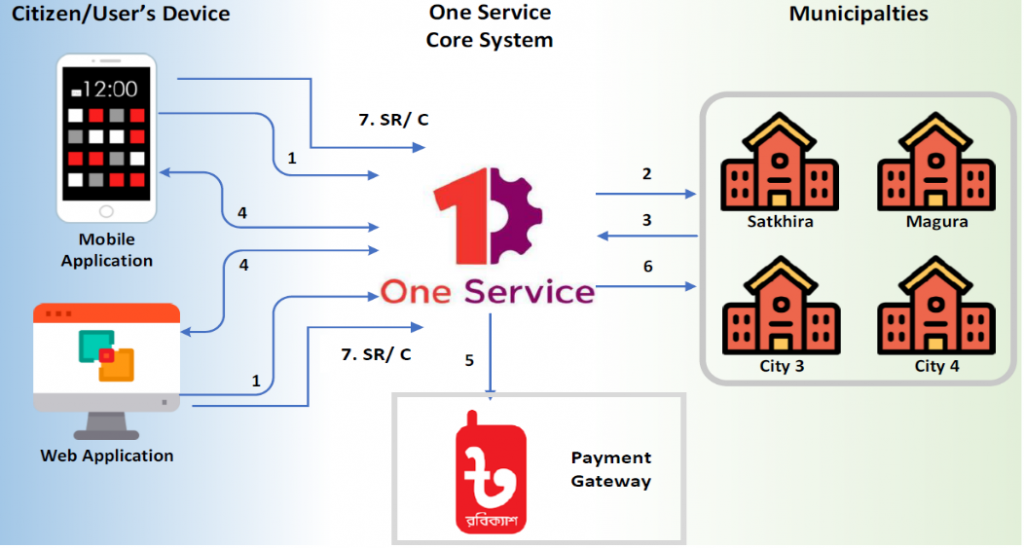 1Service also supports other interactions between citizens and municipalities, such as allowing people to make tax payments. The original scope of this grant was to use the app to facilitate sanitation services as well by connecting households with pit latrine emptying services, however the sanitation infrastructure and institutional operations at the municipalities were not ready for a digital tool to coordinate these services. 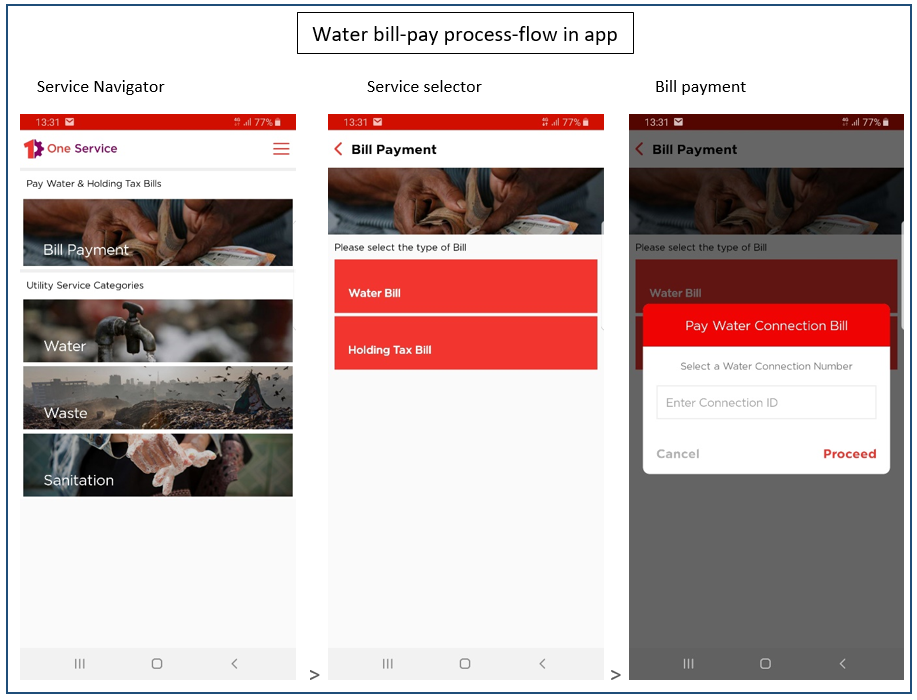 Figure 2: Steps in the app

RobiCash has limited penetration in these areas with only 1.2 per cent of those surveyed having their own RobiCash wallet, thus the majority of 1Service pay via an agent. However, the ability to quickly receive bills and the convenience of having more efficient and flexible pay points proved strong value for users.

A survey revealed the following outcomes:

“I am a primary school teacher in Satkhira and I have two children. Often it becomes very difficult for me to pay the bills in due time. My school closes at 2:30 pm and the banks close at 1:00 pm. Therefore, I previously had to take a half day leave to make the payment. Now I can pay my water bill at ease even in between cooking or on the way to my workplace and save in the additional cost of transportation.”

Making it easier for customers to receive and pay their bills improved revenue collection as seen in Figure 4, which shows a significant increase in monthly revenue for Satkhira. In October 2019, water bill collection reached 86 per cent, which is the highest ever. The average monthly water bill revenue increased by 42 per cent.

Before 1Service was implemented, the municipality had to manually reconcile bills paid at the bank to update their database, calculate new bills and print bills. The deployment of this technology has supported the municipalities in tracking, collecting and predicting their revenue more efficiently.

Lessons from the grant project

The grant was able to demonstrate the potential for digitalisation to dramatically improve the billing process and revenue collection for municipalities.

Following the success and lessons learnt from the project, both Practical Action and Robi Axiata are committed to expanding 1Service. Practical Action has secured a grant to develop faecal sludge and waste management facilities in Satkhira, which may eventually be supported by the 1Service platform. Robi Axiata sees 1Service as an important strategy to increase subscribers and brand recognition and is planning to deploy the service to other municipalities.