The challenge and opportunity of accelerating smartphone ownership in emerging markets

This blog was written by Madeleine Karlsson on behalf of the GSMA Connected Women and Connected Society programmes to announce the launch of the joint report Accelerating affordable smartphone ownership in emerging markets, which is the result of a research study conducted together with Dalberg Global Development Advisors.

Access to the internet provides countless socioeconomic benefits to individuals. Making sure offline populations do not miss out on this potentially life changing resource is a challenge that needs to be tackled, even when network coverage for internet access is in place (as discussed in a previous blog). Once network connectivity is available, smartphone ownership becomes a critical piece in the digital inclusion puzzle, as smartphones are a significant internet gateway for many in emerging markets. Despite the extraordinary adoption growth of these devices – today’s circa 4 billion smartphone connections are nearly double the figure of three years ago – the cost of a smartphone remains a critical hurdle for millions of people. Even though the decrease in smartphone prices over recent years has resulted in some lower-end devices now selling at around the US $40 mark in several markets, the fact remains that affording a smartphone is a major barrier to internet access.

A large part of the explanation lies in the device cost in relation to people’s level of income. Eastern Africa and South Asia are the regions lagging behind in smartphone adoption the most, with adoption levels as of mid-2017 at 25% and 30% respectively – much lower than the global average of over 50% [1]. A major contributing factor to this inequality is the high rate of poverty [2] in these regions; South Asia and Sub-Saharan Africa are home to the majority of the world’s poor people. In India for instance, over half of the population live in multidimensional poverty and an averagely priced smartphone can cost up to 16% of annual income for extremely poor and low-income groups [3]. GSMA analysis estimates that over 134 million people in India are unable to afford one of the cheapest internet-enabled handsets on the market, because it exceeds an affordability threshold at 5% of income [4]. 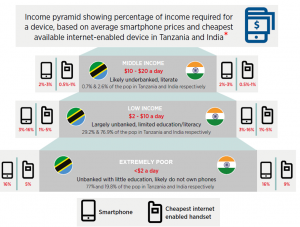 On the supply side, in addition to the manufacturing costs of the device itself, import duties and taxes imposed on smartphones can be significant contributors to total costs, as well as transportation charges (that can be particularly high in emerging markets). Inefficiencies in the outbound supply chain can also drive up costs, as devices often pass through a number of supply chain players before reaching end consumers. Distribution channels, particularly to rural consumers, are often inadequate, either not providing easy access to smartphone retailers due to location (distance from urban centres), or forcing consumers to pay a high marginal premium to a local independent dealer who is incurring high transport and inventory costs as well as benefiting from a captive market.

A large variety of factors are at play among the demand side factors influencing smartphone affordability and people’s willingness to pay. Consumers’ disposable income, combined with their value perception of the device and the internet are particularly influential. Levels of awareness of what smartphone and internet usage entail and can deliver and whether use cases are convincing enough to justify the expenditure, hugely impact demand. Limited knowledge about smartphones further manifests in gaps between perception and reality around device prices. Research shows consumers commonly have an exaggerated view of smartphone costs, which lead to the belief that such handsets are unobtainable, even in some cases where the consumer would in fact be able to afford the device.

1. Beyond their means: primarily comprising of the extremely poor, often with no reliable income source, this group needs to make major trade-offs in household expenditure to afford even a basic handset. Smartphones are not affordable for this group.

2. Cannot afford to pay for a smartphone upfront, but could afford paying in instalments: comprising of the working poor, this group finds it difficult to adjust household expenditure to purchase smartphones through upfront payments.

3. Can save to pay for a smartphone: this group consists mainly of people at the higher end of the low-income segment. Individuals have the ability to save over time to purchase a smartphone.

4. Can afford lower priced smartphones through a lump sum payment: this group comprises of middle income customers, typically with a reliable source of income. Members of this group are usually price conscious but have some flexibility to pick and choose among devices.

There is ample opportunity for the mobile industry and ecosystem players to improve smartphone affordability among these consumer segments. Through investigating 30+ business models across Sub-Saharan Africa, South Asia, and Latin America, three overarching models with different approaches to reducing consumers’ smartphone ownership barriers, with a focus on affordability, were identified. 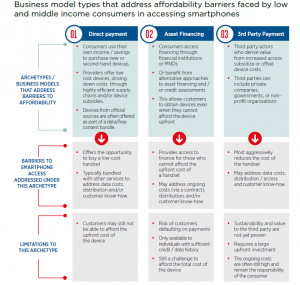 In exploring the dynamics of the smartphone ecosystem landscape, and initiatives aimed to facilitate handset ownership, we see a pattern of common challenges that consumers face across different regions and strategies that could be adopted to help tackle them.

1. Making the purchase price more manageable through financing: Potentially the most meaningful support that can be provided, is to break up the upfront cost of the device into more manageable sums that can be paid off over time, supporting the consumer through offering affordable loans, alternative forms of credit scoring and savings schemes.

2. A key area for ecosystem collaboration would be to ensure efficient distribution channels are in place for handsets to reach people, especially in locations with limited retail presence where prices are often inflated due to low supply and / or high transport costs.

3. Localising devices, reflecting market demands: Offering affordable smartphones that respond to the handset needs and value perceptions of the local consumers, ensuring that they are not paying for features that they will not use, could help lower the cost of the actual handset and drive demand and therefore could be an equally important area to focus industry efforts.

Facilitating affordable smartphone ownership for low and middle income consumers in emerging markets should be a key industry priority. Market pressures alone will not bring down smartphone prices low enough to make a significant difference to low-income groups in the near future. Mobile industry actors, financial institutions, NGOs, governments, community organisations and policy makers have the opportunity to support consumers’ improved device access, and stand to benefit from increased smartphone penetration and the ensuing socio-economic benefits.

The GSMA is dedicated to supporting ecosystem collaboration aimed at accelerating mobile internet access via smartphone ownership, and strives to inspire players in the space to explore new routes and opportunities for partnerships.

Is your organisation running affordable smartphone initiatives? We are interested in hearing from you, please get in touch at connectedsociety@gsma.com for the opportunity to be showcased on the GSMA’s Digital Inclusion Innovation Portal.

* Numbers on the LHS and RHS of the pyramid indicate what percentage of an individuals’ annual income would be required to purchase an averaged priced smartphone, or the cheapest available internet-enabled handset at each income bracket in Tanzania and India. Average smartphone costs are approximated according to data for average wholesale selling prices of smartphones. Income brackets and share of population per bracket are defined in PPP terms.