The GSMA today released a new report outlining the rapid growth of the Bangladesh mobile industry over the last decade, which now places it as the fifth largest mobile market in Asia Pacific. The GSMA Intelligence country overview also highlights some of the obstacles that may hinder the government’s efforts to achieving its Vision 2021 goals, including affordability of mobile services, taxation and spectrum pricing. Complementing this study, the GSMA also released the findings of a report it commissioned from EY on the potential economic impact of tax reform on the Bangladesh mobile industry.

The mobile industry plays a crucial role in supporting the achievement of the government’s Vision 2021 and Digital Bangladesh initiatives, as well as the UN Sustainable Development Goals (SDGs).  With 85 million unique mobile subscribers as of the end of 2017, more than half the country’s citizens now have access to essential services. However, despite 3G networks covering 93 per cent of the Bangladeshi population, mobile internet uptake is still low, at 21 per cent in 2017. The country still faces a significant digital divide and steps must be taken to enable the right conditions for mobile internet connectivity to flourish in Bangladesh. 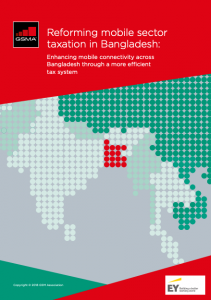