This is a guest blog, written by Bishwaraj Bhattarai, the Project Manager at Gham Power and whom leads the Off-Grid Bazaar project.

Nepal witnessed its worst energy crisis in the early 2000s. During dry seasons of the year, power cuts averaged 16 hours a day in a country reliant almost exclusively on hydropower for electricity. Rural areas faced the greatest plight due to even lower levels of electrification and the slow progress of grid extensions in remote locations. While the rural communities were forced to live in the dark or use expensive fuel-based alternatives, grid extensions for rural electrification were often severely delayed due to resource constraints and mismanagement. Decentralised rural off-grid solutions were emerging in other parts of the world, however, these remained relatively unknown in Nepal.

Gham Power partnered with national and international partners to implement what would be the first solar micro-grid-based rural electrification project in Nepal. It was also the first rural electrification project in the country to be co-owned by the local communities and was implemented through a mix of grant and commercial debt from a local commercial bank. By March 2016, Gham Power had electrified three rural villages with solar micro-grids powering around 230 households, 45 institutions and two mobile towers providing mobile network across five villages for over 20,000 people.

In May 2015, Gham Power received a grant from the GSMA Mobile for Development (M4D) Utilities Innovation Fund to expand the capacity of two micro-grids in the Eastern region of Nepal, providing energy access to two rural villages and two NCell telecom towers. In this model, mobile money was used for bill payment and smart meters were deployed to monitor individual consumption. Extension of the micro-grid through the grant was instrumental in the long-term financial sustainability of the project as it helped incorporate commercial clients ensuring improved utilisation and healthy cash-flow. 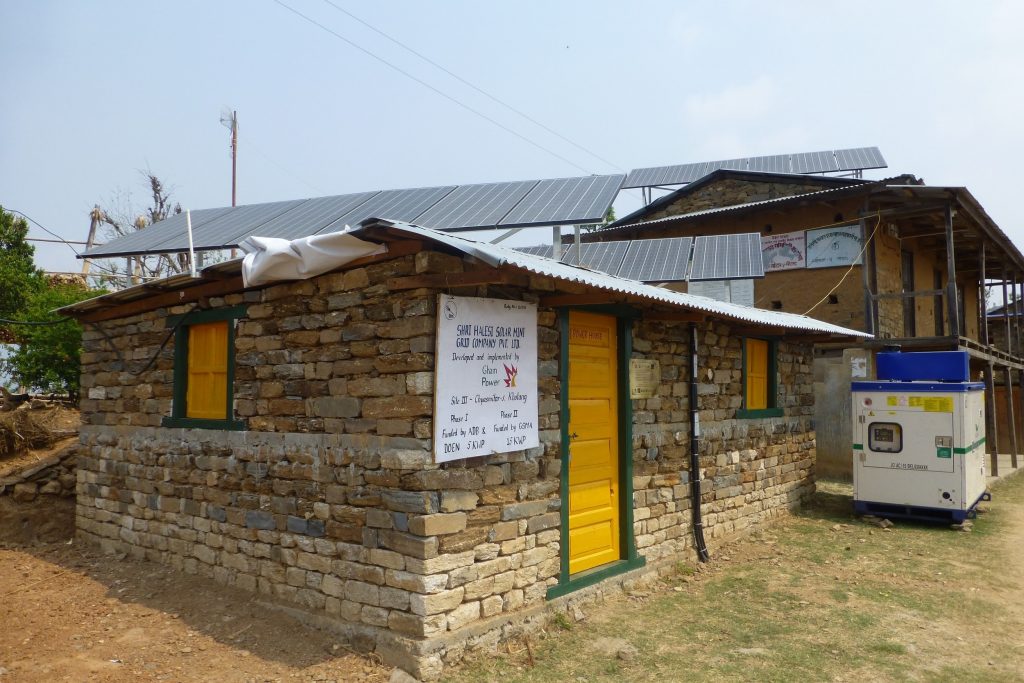 The Khotang micro-grid project has been a valuable learning experience from both a business and policymaking perspective. Through learnings derived from digitalisation, this project has helped Gham Power refine its business model and improve service delivery. For regulators and policymakers, the project established solar micro-grids as a viable and often cost-effective solution for rural electrification projects. In the past three years, Gham Power has collected four key takeaways:

The Khotang Micro-grid project has been a testament of how solar micro-grids can be a viable alternative for rapid rural electrification and the provision of modern energy access among geographically remote and isolated communities. For local communities that are dependent on unreliable and unsafe sources of energy, micro-grids provide access to reliable power with little upfront cost. For households, it means improved health and quality of life, for small enterprises, it means cost savings on diesel generators and new business opportunities.

Micro-grid rural electrification projects inherently open doors to new microenterprises, from refrigerators for medical centres to cyber cafes. In Khotang, the community further benefitted from a mobile tower that brings reliable telecommunication access. In turn, such advancements catalyse the progress in other development challenges faced by these communities such as access to information and communication services. Micro-grid developers such as Gham Power are often highly invested in the prosperity and sustainability of the local businesses and communities, as this will lead to a higher electrification rate and increased cash flows.

A significant shift in the approach and attitude towards solar micro-grids among regulators and decision makers occurred in the past three years. The government and development partners are now actively pushing solar and hybrid micro-grids for rural electrification. For instance, the government authority overseeing renewable energy projects in Nepal, is currently implementing a micro-grid project supported by the Asian Development Bank.

While these projects are almost entirely grant funded and mobilise private developers, with increasing focus and regulatory clarity, the government and development agencies are also pursuing private sector led micro-grid development in Nepal. The geographic and topographic challenges and costs associated with grid extension make solar powered micro-grids an attractive model for rural electrification and overall development of remote communities. The government has recently signed a deal with the World Bank, worth $17.2 million, to implement ‘private sector-led Mini-Grid Energy Access Project’. This project is expected to benefit over 100,000 people in rural settings and many rural micro-enterprises. 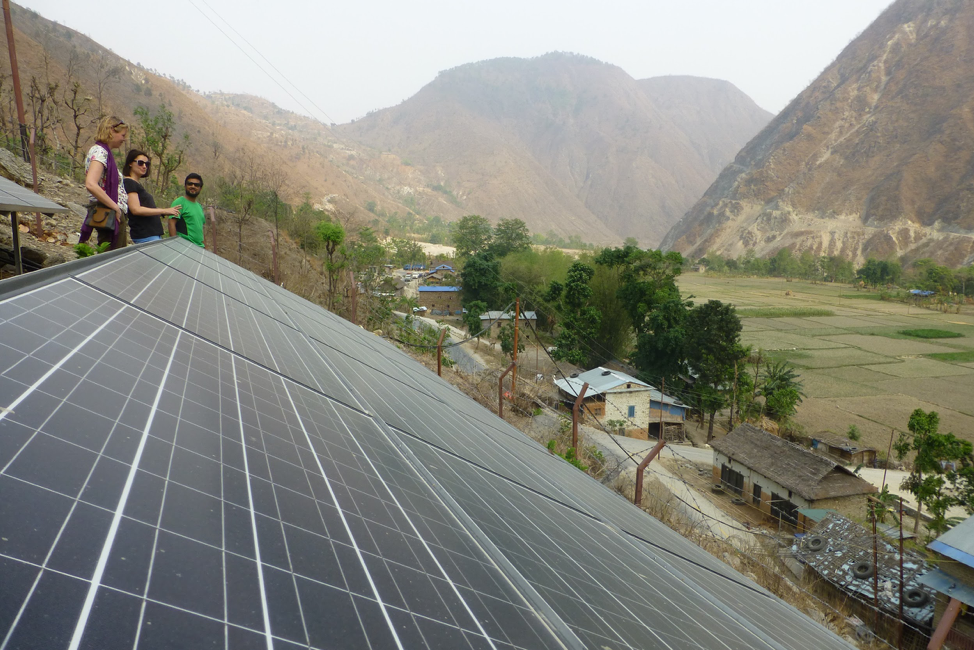 The success and sustainability of commercial micro-grids is greatly dependent on the local context. While those built around tourist sites or regions with popular local export thrive with adequate revenue from the sales of electricity alone, micro-grids built in areas with little existing productive use, often require project teams to engage locals and encourage the uptake of productive appliances to ensure commercial sustainability. Thus, Gham Power had to build strong relationships with the local communities and provide essential support and capacity building for new and existing rural enterprises.

As the business evolves, growth originates from horizontal capacity expansion as the there is an increase in productive use over the years, rather than vertical expansion in new sites, this further justifies the capital, time and effort required to set-up new sites. However, educating new customers in this context can pose a challenge due to the geographic separation of customer sites. Social mobilisation, that includes programmes to create awareness, consultation and on-boarding of people representing various social, religious, cultural and political groups, is especially difficult in a diverse country like Nepal where social and political constructs are greatly polarised.

3. Scaling can be achieved with productive end-use systems

Micro-grids must be accompanied by productive use solutions. Household clients who use electricity only for lighting, mobile charging or entertainment are much more likely to miss payments or subscribe to lower/basic packages. Thus, Gham Power is adopting a phased approach to developing micro-grids: first focus on productive use stand-alone solar systems for the households and develop a critical number of clients that can later be connected to a micro-grid for greater productive use of energy.

The productive use standalone systems offer a unique set of opportunities. These standalone systems are small enough to be owned by a household where the purchase decision is made by 1 or 2 individuals, and the process is much simple. In comparison, larger systems, that are owned and operated by the community, require collective decision making and close cooperation among all the individuals representing various social, cultural and political groups. This is particularly challenging in multicultural, multi-ethnic and politically polarised communities like in Nepal. Thus, focusing on smaller standalone systems makes the process of project acquisition and development much more rapid and scalable. On the other hand, it also allows us to understand every client and their needs better to offer a customised and cost-effective solution.

Gham Power is piloting this concept by developing stand-alone, off-grid solar powered equipment for smallholder farmers. In Nepal, agriculture contributed to a third of gross domestic product and employed about 80 percent of the rural labour force. and less than five per cent have access to fundamental inputs like affordable and reliable irrigation. To fill this gap, Gham Power is implementing solar-powered irrigation systems, following the deployment of 100 irrigation systems, early results indicate a 30 to 100 per cent increase in farmers’ net income. Gham Power is expanding this project to 20 districts in Nepal, and is developing a strategic partnership with grassroots organisations to scale this project.

The Khotang micro-grid project trialled digital technology and connected devices. It was the first rural electrification project to use smart energy meters that facilitated timely payments of energy bills, thus reducing the non-payment risks. Mobile money was also integrated for bill payment with eSewa’s digital wallet which facilitated remote collection of funds and reduced the company’s operational costs. These features have now become the norm with all the new micro-grids being developed adopting one or both of these technologies.

Following the positive experience with digital solutions, Gham Power is investing heavily in digitalisation and have developed a management and real-time monitoring platform – a web application called Off-Grid Bazaar. The platform allows local partners to mobilise staff and agents to collect orders from rural farmers and use the farmers’ agricultural data to design an optimal and cost-effective solution that meets their specific needs. Local financial Institutions can then analyse the request and provide adequate financing solutions with little to no upfront cost. Each solar water pump comes with a proprietary mobile-money integrated smart-meter equipped with various sensors to send agricultural (soil temperature, ph, humidity, etc.), and operational data to the web platform. Ncell provides Machine-to-Machine (M2M) SIM cards that enable smart-meters to communicate with the web application and allows Gham power to remotely disable services in the case of non-payment. 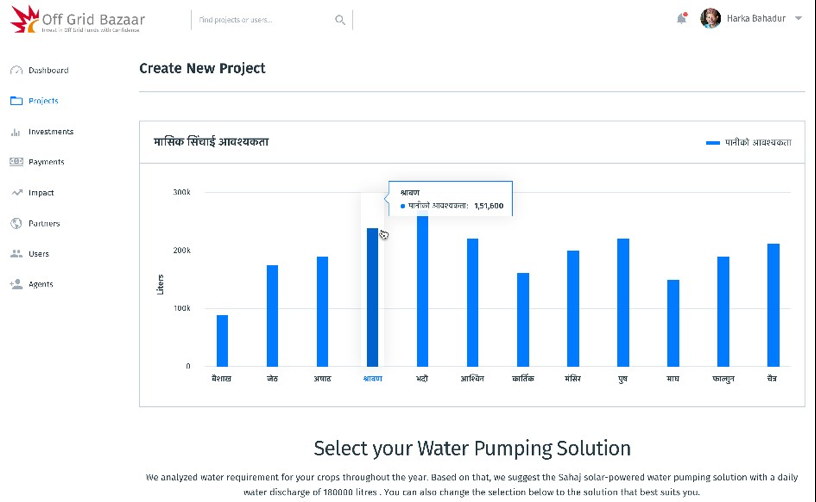 Gham power believes that a transparent platform underpinned by strategic partnerships with local institutions and a strong distribution network, can generate tremendous value for end users and puts in a great position to increase the scale of our operations.

The Khotang micro-grid project was successful in providing access to energy, but also in setting a discourse to eventually open the market for (commercial) solar micro-grids as a viable rural electrification strategy. It also set an important standard on digitisation, automation and data-driven project development for Gham Power and for the wider energy access sector in Nepal. 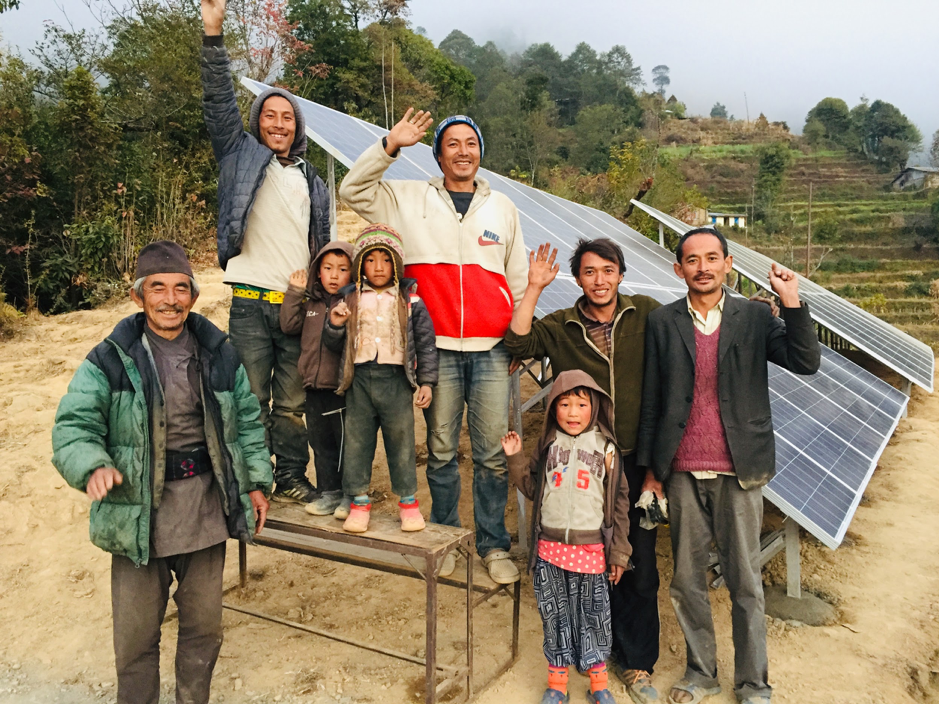