Asia Pacific: a look at the 565 active tech hubs of the region’s emerging economies

Emerging markets in the Asia Pacific region are home to one-third of the world’s population. Over the past eighteen months, the investment landscape in the region has witnessed a dramatic increase in capital injection. TechInAsia recently estimated a 200% spike in the volume of venture capital poured into tech start-ups across the region. Our recent update to our 2016 tech hubs research showed that the tech hubs ecosystem in emerging markets (excl. China) has grown significantly, counting today with 565+ active tech hubs (vs 287 in 2016)– of which over 250 are in India. Indonesia (50+), Malaysia (39), Thailand (38), and Vietnam (37) follow. Out of the countries analysed, we identified 6 fast-growing markets (India, Malaysia, Philippines, Nepal, Laos, Bhutan) for which the number more than doubled in the period.

For clarity and consistency purposes, we have kept the definition of tech hubs we had adopted in 2016: “physical spaces designed to foster and support tech start-ups”. These include incubators, accelerators, co-working spaces, fab labs, makerspaces, hackerspaces, and other innovation centres.

In Asia Pacific, a clear-cut distinction between first and secondary ecosystem cities is less straightforward than in other regions. Capital cities such as Jakarta, Bangkok, and Kuala Lumpur are home to nearly 30 hubs each but most developed urban centres such as Karachi and Ho Chi Minh are steadily catching up with over a dozen active hubs or programmes each. Tier-2/3 cities are particularly active in India, where hubs in Ahmedabad, Pune, and Jaipur have been mushrooming over the past two years. Further, the Asia Pacific region is surrounded by major high-tech cities like Hong Kong, Singapore, or Sydney, which play a pivotal role in providing resources, access to international markets and capital. 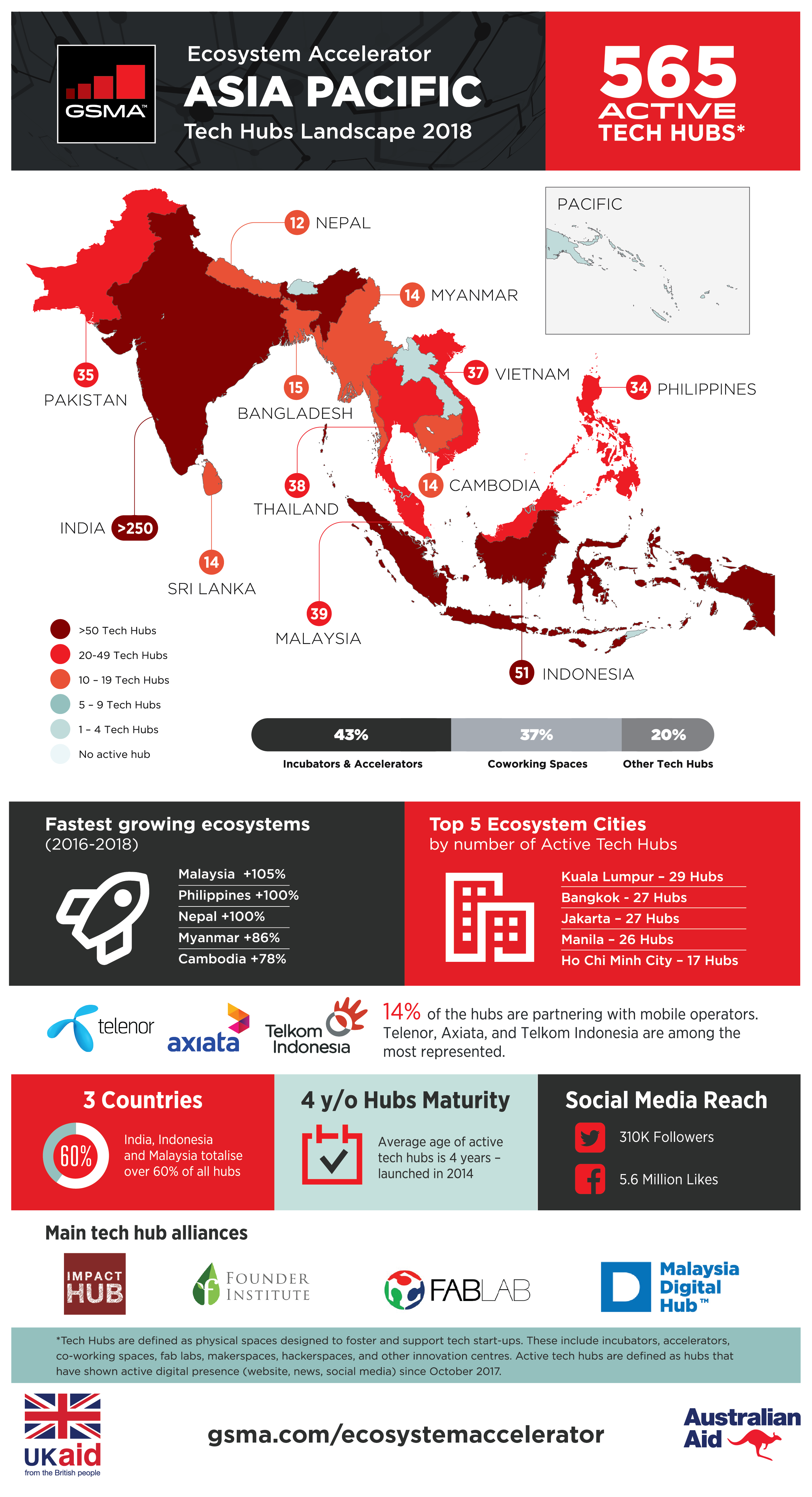 With more than 50 active tech hubs identified, Indonesia represents the largest ecosystem across emerging markets in the region outside China, India, South Korea and Singapore. The country’s sizeable market is home to over 250 million people, with its GDP recently hitting one trillion USD, and the several improvements made by the government over the past few years have begun attracting increasing attention from foreign investors. Among the factors contributing to the significant growth of the ecosystem is the joint commitment by the government, banks, corporations, and mobile operators to develop an appropriate infrastructure able to absorb and foster the emerging innovative scene. Mobile operators have been enthusiastic supporters of the start-up scene since the early 2010s, providing start-ups with funding and market resources. Telkom Indonesia-backed Indigo Incubator, and Ooredoo’s IdeaBox are today among the leading hubs in the country. The government and educational institutions have also promoted initiatives such as 1000 Digital and installed dedicated bodies such as BEKRAF – Indonesia Creative Economy Agency – or BINUS, the university-based accelerator supported by Kejora, Microsoft, and Telkomsel. Finally, a number of international accelerators such as Plug and Play, Google, Founder Institute, and MaGIC have launched programmes in the country.

Beyond Singapore (not covered in our research as we focused on emerging markets) and Jakarta (27), Kuala Lumpur (29) and Bangkok (27) lead as the most active capital cities in the region and have been competing to position themselves as the next dominant ecosystem cities by investing in large-scale projects usually co-financed by public and private investments. Malaysia is home to key entities such as MaGIC’s  Global Acceleration Programme, and Cyberjaya, a tech city in the outskirts of Kuala Lumpur. Mobile operator True Corporation launched its 637 million USD True Digital Park in Bangkok, purportedly the largest tech park in the region. Besides, a growing number of Singapore and Hong Kong-based VCs have increased their operations in both Thailand and Malaysia. Among these, 500 Startups, East Ventures, and Golden Gate Ventures have been the most active. Likewise, accelerators such as MuruD and ImpactTech have launched programmes in Thailand, while the Hong Kong-based SuperCharger FinTech Accelerator is due to start a second round in Kuala Lumpur in early 2018.

Vietnam, which follows as the 5th largest tech hubs ecosystem in the region with 37 active hubs, looks more geographically spread than the Thai and Malaysian ones, not only because of the presence of two core ecosystem cities – HCMC and Hanoi – but also thanks to the steady rise of non-capital cities such as Da Nang (5), whose renowned Hi-Tech Park recently received a USD62 million investment. The country is home to regional programmes such as the Mekong Business Initiative, which runs a series of industry-focused programmes across Southeast Asia – in particular, MIST Accelerator and MATCh, and has been in the spotlight as more and more investors have begun perceiving the untapped potential of its 90+ million population. Among its renowned acceleration programmes are the Vietnam Innovative Start-up Accelerator (VIISA), Founder Institute’s Topica, and HATCH.

Most ecosystems in South Asia have also registered considerable growth over the past two years. Pakistan (and its three tech ecosystem cities of Islamabad, Karachi, and Lahore) saw a 30% increase in the number of active tech hubs (36 vs 26 in 2016), positioning itself as the largest tech ecosystem in the subregion after India. Mobile operators play a key role in the market with hubs such as LUMS Center for Entrepreneurship, Jazz xlr8, and Velocity that figure among the country’s most active spaces, backed by Telenor, or Mobilink’s Jazz (Veon). Conversely, in spite of its 165+ million population, the Bangladeshi ecosystem has been expanding more slowly than its counterparts (from 13 to 15). Yet, the concentration of the innovative scene in Dhaka has gradually made it an emerging ecosystem city with over a dozen active tech hubs, such as the Grameenphone (Telenor)-operated GP Accelerator. 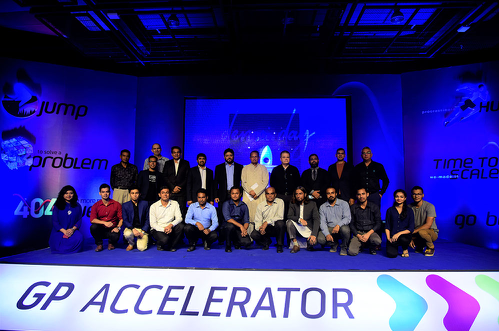 Among tier-2 ecosystems, Nepal stands out, doubling its number of active tech hubs since 2016 (12 vs 6) and positioning itself only slightly behind Sri Lanka (14) and Bangladesh (15).

Finally, in the Pacific area, most islands still lack properly developed ecosystems due to the limited size of the individual markets, the complexity of developing sound infrastructure between the archipelagos, and the significant leverage of hubs like Sydney, Wellington, and Jakarta. In Papua New Guinea, Kumul Game Changers helps innovative entrepreneurs scale their operations through a 6 to 12-month support programme and the National Development Bank announced in late 2017 the opening of a new incubator in Port Moresby. In Fiji, following a recent push by the government to empower young entrepreneurs through the Youth Entrepreneurship Scheme should see the ecosystem grow. Further, the recent announcement of a new ICT submarine cable providing fast connection to Fiji and Samoa, or the establishment of Technology Institutes in countries like Kiribati and Timor-Leste, are also positive evidence of a collective effort towards innovation and entrepreneurship support.

Overall, the technology landscape in the Asia Pacific region has shown both high potential and high growth rate. Nested by economic giants such as China/Hong Kong, India, Singapore, and Australia, most emerging markets benefit from the voluminous deal flow and the growing enthusiasm of international investors and take advantage of the widespread optimism to improve their ecosystems and rise as a valid alternative to the more established markets.