Networks have become pervasive and ubiquitous in everyday life. It is hard to imagine, especially in the developed nations, what life was like when there was no mobile broadband and services on top. However, this does come at a cost. An important aspect to consider is the energy consumption of the network, where core networks like data centres demand constant temperatures stabilised by either heating or cooling; while radio access networks require electricity to transmit and receive signals.
With 5G expected to drive network densification with its new requirements, demands are expected to increase the energy consumed by the network, albeit at better energy efficiency. It will also mean that carbon emissions will increase, aggravating climate change. Calls for a non-traditional approach where electricity consumption can be done sustainably while reducing the costs of energy are needed. It is for these reasons why NTT DOCOMO developed Green Base Station, an environment-friendly and sustainable energy supply scheme for radio base stations.

The GSM Association (“Association”) makes no representation, warranty or undertaking (express or implied) with respect to and does not accept any responsibility for, and hereby disclaims liability for the accuracy or completeness or timeliness of the information contained in this document.

NTT DOCOMO have developed Green Base Stations, a non-traditional, environmental-friendly and sustainable energy supply scheme for radio base stations.

Green Base Stations are equipped with photovoltaic (PV) panels, cycle-type Li-ion storage batteries, DC power controllers, and supply generated power to radio equipment with smart power control. They can make use of renewable energy by local PV power generation, therefore can reduce CO2 emission from commercial electric power use. Additionally, in case of a power outage due to disaster, they work longer time by PV power generation rather than relying on backup power alone.

Green Base Stations have been installed since 2013 and a total of 133 stations were installed by March 2018. The company aims to increase PV generation capacity to 2000 kW by 2020. Mobile network operators (MNOs), introducing 5G networks, will increase consumption of electric power for 5G network facilities in the future, and are expected to reduce power consumption both in terms of business and CSR requirements.

In recent years, global environmental issues have been a concern, and the reduction of CO2 emissions has been called for. The share of renewable energy is also required to increase in SDGs. Mobile networks require a lot of electric power because much network equipment is always in operation, therefore cellular services are one of the major energy consuming industries in many countries. Since the increase in the power consumption of the network equipment due to the future introduction of 5G network may become big issues, the reduction of CO2 emission by power saving and utilisation of renewable energy is more desirable in cellular services.

In Japan, disasters such as earthquakes and typhoons occur and cause a power outage relatively often. In case of a power outage, it is essential for operators to continue communications services as much as possible, which are the important lifelines. The base station is commonly equipped with a backup battery, but the backup capacity is not always sufficient for power outages by some disasters in Japan. Installing more batteries is one simple solution, but it costs a lot. Therefore, a solution that balances network cost and disaster tolerance is desirable.

NTT DOCOMO has been conducting research and development on “Green Base Station” which is an environmentally friendly and disaster-resilient base station. The Green Base Station is equipped with photovoltaic (PV) panels, a cycle-type Li-ion storage battery, and a DC power controller, as described later in detail. The power generated by the PV panels is supplied to the radio equipment, and the surplus generated power can be charged to the battery. By controlling locally generated power, it is possible to improve renewable energy use and disaster resilience.

In NTT DOCOMO, Green Base Stations have been installed since 2013, adding functions to existing base stations, and a total of 133 stations were installed by March 2018 (including types without controller). The company aims to increase PV generation capacity to 2000 kW by 2020. 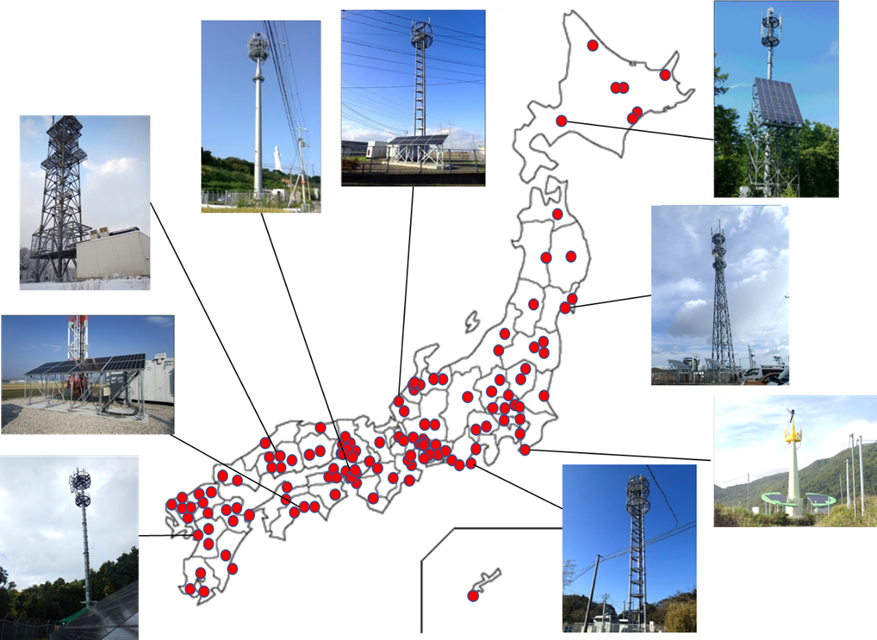 Fig.1 Deployment of NTT DOCOMO’s Green Base Stations in Japan

By maximising locally generated renewable energy use, reduction of commercial power consumption (reducing CO2 emissions and electricity costs), an extension of service operating hours of base stations autonomously in case of a power outage (contribution to BCP), and reduction of on-site operation cost of maintenance personnel due to disasters can be achieved

3. NTT DOCOMO and the Solution

NTT DOCOMO, Japan’s largest telecommunications company, provides innovative, concerned and secure mobile services that enable customers to realise smarter lives. The company services over 73 million customers in Japan via advanced wireless networks, including a nationwide LTE network and one of the world’s most progressive LTE-Advanced networks.

DOCOMO is a world-leading developer of 5G networks, which it plans to deploy in the 2020 s by learning network function virtualisation (NFV) and other technologies. DOCOMO is also driving innovation in NFC infrastructure and services, emerging IoT solutions and many other mobile-related initiatives.

In order to maximise renewable energy use and the improvement of disaster resilience, it is desirable to introduce Green Base Stations which are equipped with the following equipment. Those are connected to DC part of a power circuit (power input of radio equipment), in order to supply power to radio equipment even in case of a power outage and to lower AC/DC conversion loss.

Fig. 2 shows an overview of the testbed system of the Green Base Station at NTT DOCOMO R&D centre, and Fig. 3 shows a photograph of the test bed. 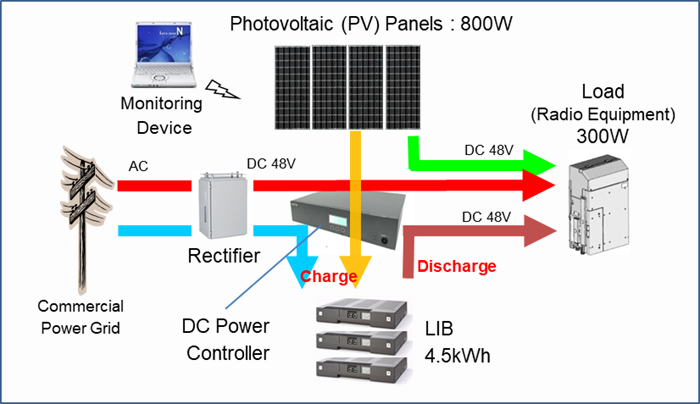 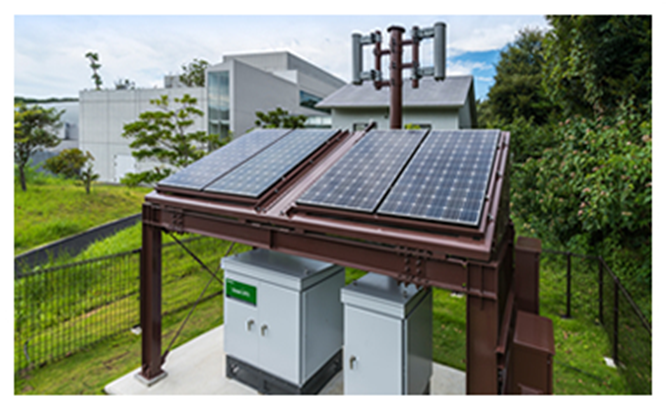 3.2 Applying the solution to the mobile network

In the method 2, a certain amount of free capacity is made beforehand (presetting to the certain state of charge (SOC), which represents a percentage of the stored electricity of a battery) to charge the surplus power. The preset SOC should be selected to the value maintaining the required backup time. When the PV power generation decreases, the battery discharges and supplies power to the radio equipment, and SOC returns to the preset value. This process can improve the renewable energy rate because the disposal of surplus generation decreases. However, if the preset SOC is constant every day, the surplus power could be discarded on the day when the power generation is large. (A small preset SOC can decrease discards, but if it’s too small the required battery capacity is too large.)

In order to avoid such a situation, in method 3 an appropriate preset SOC is estimated based on the weather forecast of the day, and the renewable energy rate is improved furthermore.

Figure 4 shows how the SOC changes over time depending on the weather in method 3. When the amount of surplus power generation is expected to be large in the forecast of sunny days, the battery discharge to increase the free capacity before PV power generation, to control aiming at the maximum SOC of the day being 100%. (Amount of discharge is decided in the centre server at the other location, and is informed to the DC power controller.) When the forecast is rain, no discharge control occurs. This can improve the renewable energy rate while maintaining the expected backup time. 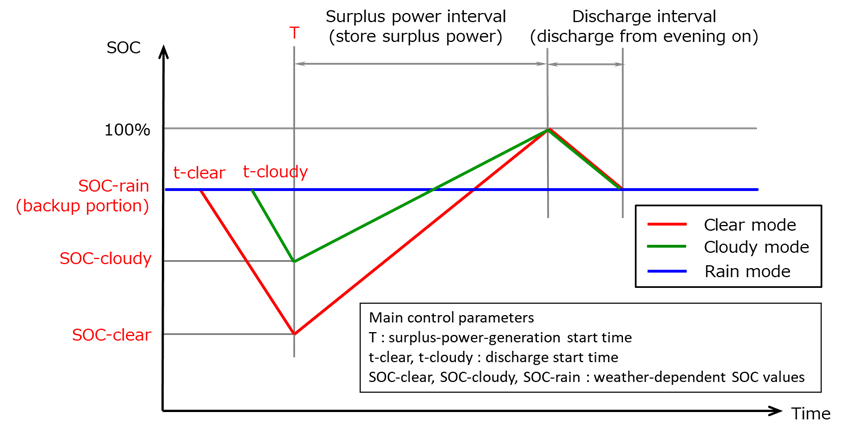 The main specifications of the experiment are shown in Table 1.

Since Green Base Stations can reduce commercial power use, OPEX in electricity rate can be also reduced. In addition, it would be possible to reduce the OPEX of disaster countermeasures.

Under the same conditions as in the experiment in Chapter 3, commercial power consumption can be reduced by up to about 40%, as can OPEX reductions in electricity rates. (However, the value may fluctuate according to the conditions such as the number of PV panels installed, the load power consumption of radio equipment, weather/climate, and forecast accuracy, and so on.)

In addition, reducing service outages due to power outages can also reduce the on-site operation costs of maintenance staff.

There is no revenue creation since this is a cost reduction solution.

NTT DOCOMO has been conducting research and development on Green Base Stations with the aim of making effective use of renewable energy and extending service hours during power outages. The Green Base Station can supply the power of the radio equipment by the power generation by the PV panels, and realises the base station which is environmentally friendly and disaster resilient. In this document, it is shown experimentally that the smart control of PV power generation and batteries can significantly reduce the use of commercial power. Therefore, it can be said that the OPEX of commercial electric power rates can be also reduced. NTT DOCOMO will continue its efforts to realise sustainable mobile communications services.

Would you like to receive an offline version of this document to your e-mail?

You can read the document straight away, or login to your Infocentre2 Member account, allowing you to make comments and suggested edits directly to the documents. Logging in will also reveal any additional member-only content.