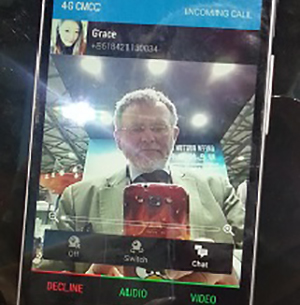 Mobile Asia Expo 2014 in Shanghai, China was a landmark for the Network 2020 Programme with five live, LTE-based native demonstrations of the ‘Green Button Promise’ in action from China Mobile, D2 Technologies and NewNet (formerly NewPace), Jibe Mobile, Huawei and Summit Tech. As native implementations, they all made the user experience so straightforward because they were close to the operating heart of the device and not as a downloadable app – so choosing voice or video and adding in other rich services like chat, picture and file sharing was simplicity itself. With several innovative new services on show, operators could judge the monetisation potential for themselves.

A variety of ‘Green Button Promise’ demos on the GSMA’s Pavilion at the well-attended Mobile Asia Expo showed solutions from leading vendors and a local operator covering many of the joyn Blackbird features.

D2 Technologies & NewNet teamed-up to use a live network accessed using a small LTE Femtocell with a cloud-based back end and Google Nexus 5 devices from LG. The device’s native phone dialer had both voice call and video call buttons, and the in-call screen showed several RCS sharing functions – the ‘Green Button Promise’ clearly in action! The communication speed between devices over the network was impressively fast and the user experience emphasized the simplicity of adding options when in-call, including sharing location, sharing video (upgrading an IR 92 VoLTE call to an IR 94 Video Call), sending a picture and starting chat.

Jibe Mobile demonstrated its hosted IP communications / RCS solution for operators using a Android and iOS mobile and tablet devices. Hosted solutions are ideal for operators who want to decrease the time to market for new service launches. Demonstrations of Voice and Video-based calling from its stand in GSMA’s Connected City were impressively fast, with no discernable delays from the routing to the hosting servers. Innovative additional features included a range of stickers to use in chat and location sharing. Adding video into calls was effortless for the user.

Huawei’s V2oLTE – Voice and Video over LTE solutions powered a number of innovative demonstrations. Of interest for the vertical markets was the facility to use native RCS capabilities to share a video stream with a contact centre, avoiding, for instance, time delays for an insurance assessor to arrive on an accident scene and therefore generating significant savings. HD video calls that switched seamlessly from a mobile to a TV gave impressive images and the company’s ‘Smart Doorbell’ showed how communications capabilities could be implemented with a simple SDK within a variety of devices, allowing service providers to expand their user bases beyond people.

Summit Tech’s native implementation of voice and video communications featured a single stack for VoLTE as well as the full RCS feature set in a Samsung Galaxy Mega. This enabled seamless IR 92 VoLTE calls and Video Calling IR 94 with other features aimed at consumer and enterprise markets, demonstrating new monetisable RCS services. Consumer oriented features included RCS stickers and ‘Social Ringers’ with the caller’s Social Media feed shown on your device’s screen. Enterprise features included voice and video calls that could be seamlessly transferred from the mobile to a conference phone using a Near Field Communications (NFC) connection and then upgraded from a voice to a video call.