From virtual reality to connected cars, Summit Tech shows there is no limit to RCS 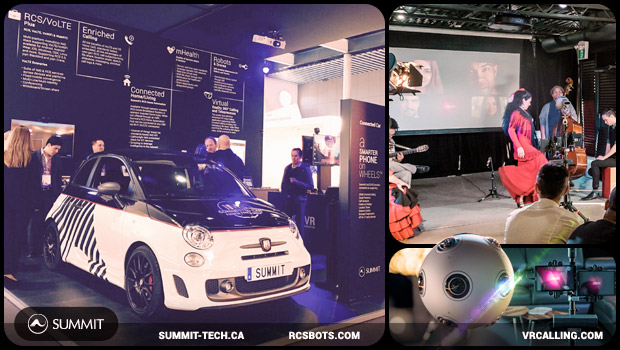 The diversity of opportunities created by Rich Communications Services (RCS) and Universal Profile (UP) was demonstrated by Montreal-based Summit Tech at MWC 2017, which is creating chatbots for every situation from the virtual reality and drive-through retail to the emergency services.

Summit Tech has been involved with developing chatbots since the early days of home automation and shopping applications. Though it still supports these classic chatbots, the “really special” growth areas it has identified are in virtual reality and the connected car, says Summit Tech’s chief product officer Ron Nessim.

Summit has developed chatbots which help users to navigate their way around virtual worlds. These VR chatbots will make it easier for users to choose services, such as conferences or watching a film or presentation. These illustrate the three-dimensional sophistication of the latest incarnations of RCS, which have added an extra conceptual level to the chatbots we are starting to enjoy using on our phones, Nessim says. The more complex 3D chatbots will have human-like qualities that will make them easier for users to relate to, says Nessim.

Having exemplified the concept of chatbots, Summit Tech is also offering mobile operators, systems integrators and their clients a range of more tangible, real world applications for the connected car. The “rich card” feature specified in the UP 2.0 standard, for example, allows connected car owners to be able to order and pay for goods from the dashboard of their car. At MWC, Summit Tech demonstrated how a commerce driven app could enable a connected car driver to detect a Bluetooth beacon at a drive-through restaurant, receive a menu, place an order, receive a rich card-enabled invoice and approve an interaction with their digital wallet.

“Drivers can now use artificial intelligence to get served quicker, rather than have to wait for a human operator,” says Nessim.

As a member of the GSMA’s Global Functional Requirements Group, Summit Tech contributed to the development of the technical standards that mobile operators will be able to use to create further RCS related services. GSMA’s Universal Profile for RCS has enabled the connected car’s dashboard computer to integrate with a smart phone. This means that the smart phone’s apps can pair up with all the technology in the car, from cameras and monitors to the engine’s computers, creating intelligence on every dimension in which the car exists, including the internal state of all its components, the welfare of the vehicle’s occupants and the car’s geo-positioning.

Summit Tech has also released a software developer’s kit that automatically takes care of the communications syntaxes – such as IMS, RCS and VoLTE – that application writers are unlikely to be familiar with and won’t want to invest time in learning. It is also offering an aftermarket option, so that existing cars can be retrofitted with intelligent dashboards that can speak to the engine’s computers, creating connected cars out of older models.

“The connected car has huge possibilities for the emergency services,” says Nessim.

Summit Tech aims to live up to its name by offering premiership RCS based services to the highest degree, by building on the solid foundations of GSMA’s Universal Profile.