5G in The United Kingdom: Calls for Consolidation Grow

The United Kingdom (UK) was among the first markets to launch 5G globally, with EE launching the 5G in May 2019. Since then, despite UK operators ramping up 5G investment, the market has been on par with many other European markets in terms of 5G performance, but the UK still lags behind 5G pioneers like South Korea and China as we saw in Q1-Q2 2021.

According to the Ofcom’s Connected Nations 2021 report, 5G network investment in the UK is accelerating, hitting £330 million in 2020 — an increase of over £150 million (88%) vs. 2019. Dense urban areas are mostly supported by high capacity C-band spectrum (awarded in 2018 and in 2021), increasingly augmented by hotspot deployments in suburban areas and around main transport corridors. The number of mobile base stations providing 5G services more than doubled last year — from 3,000 sites in 2020 to over 6,500 sites in 2021. Based on the UK’s population as of 2020, this would equate to over 10,000 people per 5G base station, placing it well behind South Korea, China, the EU average, and even the US according to the EU 5G Observatory’s International Scoreboard.

In order to reduce costs and optimize network deployment, the UK’s mobile network operators already deploy and run a portion of their radio access network (RAN) via network sharing agreements. Mobile Broadband Network Limited (MBNL), is a 50-50 joint venture between EE and Three UK, to manage the design and operation of their shared network. Additionally, Cornerstone Telecommunications Infrastructure Limited (CTIL) is a 50-50 joint venture between O2 and Vodafone that owns and oversees the operators’ passive tower infrastructure.

O2 and Vodafone announced in 2019 that they would share 5G- active equipment, such as radio antennas, in order to reduce the time to launch and cost effectively deploy 5G. This excludes around 2,700 sites in densely populated areas (in over 20 cities) where the operators will maintain separate active RAN components to give them greater autonomy and enable more flexibility to meet customer requirements. In January 2021, Vodafone transferred its 50% share to Vantage Towers.

A recent discussion paper by UK regulator Ofcom illuminated its future approach to mobile markets, and while it shied away from further regulation, it did highlight the need to plan for more network capacity to meet future demand. Additionally, Ofcom’s discussion paper highlighted releasing further spectrum, looking to technological advances to improve spectral efficiency, and the need for further network densification. However, the challenge for operators lies in supporting the level of network investment required given the current mobile market structure in the UK.

There is a clear desire for further mobile network consolidation in the UK and elsewhere in Europe, with recent examples including the agreed joint venture between MasMovil and Orange in Spain, and Iliad’s recent bid for Vodafone Italy. The last time the UK market saw mobile consolidation was in 2010 with the merger of T-Mobile and Orange to form EE. Since then, subsequent attempts to drive further mobile consolidation — Three UK’s planned merger with O2 in 2016 — have been blocked by Ofcom and the European Commission. During Three UK’s  recent 2021 results announcement, Robert Finnegan, Three UK’s Chief Executive Officer, warned that despite achieving positive results, “the UK market with four operators continues to remain dysfunctional and requires a structural change to improve the overall quality of infrastructure that UK customers should expect.”

Ofcom’s latest discussion paper alludes to a potential softening in its stance on mobile mergers, indicating that it would be “informed by the specific circumstances of that particular merger, taking into account how markets are evolving.” Given the strong move towards convergence, such as BT’s acquisition of EE and the more recent O2 and Virgin Media merger, further market consolidation cannot be ruled out.

Freeing up further spectrum for 5G use remains a priority

Since early 5G deployments, all four operators in the UK have been utilizing mid-band spectrum for 5G, which is considered a spectrum “sweet spot” that offers both fast speeds and broad geographic coverage. In April 2021, every operator boosted their spectrum holdings across the 700 MHz and 3.6-3.8 GHz spectrum bands. O2, for example, has started using low-band spectrum for 5G, and has recently committed to invest at least £10 billion in the UK, delivering 5G to over 2,000 sites across the country in 2021. The operator’s 5G coverage currently extends to 300 towns and cities and is set to reach 50% of the UK’s population with its 5G services in 2023.

Operators have been also re-farming their legacy 2G and 3G spectrum for 5G and utilizing dynamic spectrum sharing (DSS) to facilitate dynamic use of 4G and 5G in the same bands. In December 2021, the government also announced the goal of switching off 2G and 3G networks by 2033 to free up spectrum for 5G. Ofcom’s recently published discussion paper on mobile networks and spectrum, identifies a large amount of mobile spectrum in the mmWave frequencies, which if allocated, will help boost network capacity. The regulator will consult on proposals to enable mmWave band in Q1 2022/23.

On the road to 5G standalone networks

5G is currently rolled out in a non-standalone (NSA) mode in the UK, meaning that it still relies on the 4G LTE core network. We expect all operators to upgrade to 5G standalone (SA) in time, with 5G core networks and 5G RAN, especially as additional 5G capabilities proliferate such as ultra-low latency communication (URLC)  and virtual network functions such as network slicing which will enable new 5G use cases. Operators in the UK are already trialing 5G SA:  in June 2021 Vodafone launched a commercial pilot of 5G SA in London, Manchester, and Cardiff, which built on an earlier trial carried out with Coventry University in the summer of 2020. In March 2022, Vodafone and Ericsson completed the UK’s first 5G SA network slicing trial. It was a lab demonstration of 5G network slicing with on-demand quality of service control for virtual reality use case in a retail store. The slice guaranteed a download speed of 260 Mbps and latency of 12 milliseconds. It isn’t clear when Vodafone plans to commercially launch 5G SA but Vodafone Germany became the first operator to launch 5G SA in Europe last year.

The recent 5G SA collaboration between EE, the BBC, and Ericsson, “The Green Planet AR Experience,” showcased the unique capabilities of 5G SA and edge computing. Additionally, EE plans to extend 5G coverage to 90% of the U.K. geographical area by 2028, which will be facilitated by the migration to a cloud-based core and the launch of 5G SA by 2023. EE is also planning to sell 5G SA in a way that will resonate with the customers and bring “technology to them in a really human way”. This is a move away from EE advertising the benefits of 5G as being able to get a real-time close shave with a robotic arm. However, Marc Allera, CEO of BT Consumer (EE’s parent company), does not rule out metaverse as a possible proposition blending entertainment, sports broadcasting, gaming, and e-commerce.

Huawei kit needs to be removed from a number of European countries, including the UK In July 2020, in response to US sanctions against Huawei, the Department for Digital, Culture, Media, and Sport (DCMS) announced that it overturned its earlier decision to exclude Huawei’s access from core and sensitive networks and, instead, completely remove Huawei’s kit from the UK’s 5G networks by the end of 2027. The government further pushed Open RAN expectations in December 2021 by setting a goal of having 35% of its telecom network traffic carried over Open RAN by 2030. This target is an aspirational one, rather than a hard mandated quota and is apparently supported by all mobile operators. It does come with a £250 million funding to support and accelerate the development of open and interoperable RAN, which is significantly less than €2 billion the German government has  specifically dedicated for Open RAN as part of €50 billion Package for the Future.

In January 2022, Vodafone switched on the UK’s first 5G Open RAN site in Bath, Somerset, which is the first of 2,500 planned sites and marks the beginning of the first scaled Open RAN project in Europe. EE’s parent company, BT Group, is more skeptical about the technology, with Neil McRae, MD of Architecture and Strategy and chief architect at BT Group, reminding the MWC 2022 audiences that there are different paths operators can take to drive down costs and improve performance. Nonetheless, BT is trialing Open RAN in Hull to see how the technology can improve the customer experience of EE’s 5G network. We have discussed the current progress on Open RAN across Europe in our latest article 5G in Europe: Reflecting on the Progress So Far and Mapping the Future and reflected on the discussions on this topic at MWC 2022 here.

UK compared to its European peers

In our recent post “5G in Europe: Reflecting on the Progress So Far and Mapping the Future”, we looked at how different European countries stacked up against each other and international peers. Using Speedtest Intelligence®,  we compared 5G in the UK against its peers’ 5G performance.France (190.17 Mbps) and Switzerland (188.27 Mbps) topped our list with the fastest median 5G download speeds  during the second half of 2021, followed by the U.K. (176.22 Mbps), Ireland (162.46 Mbps), Germany (155.87 Mbps), and Netherlands (142.55 Mbps). Interestingly, despite all of the French operators launching 5G service in December 2020, relatively late compared to other analyzed countries, they achieved top median download speeds due to substantial network investments. 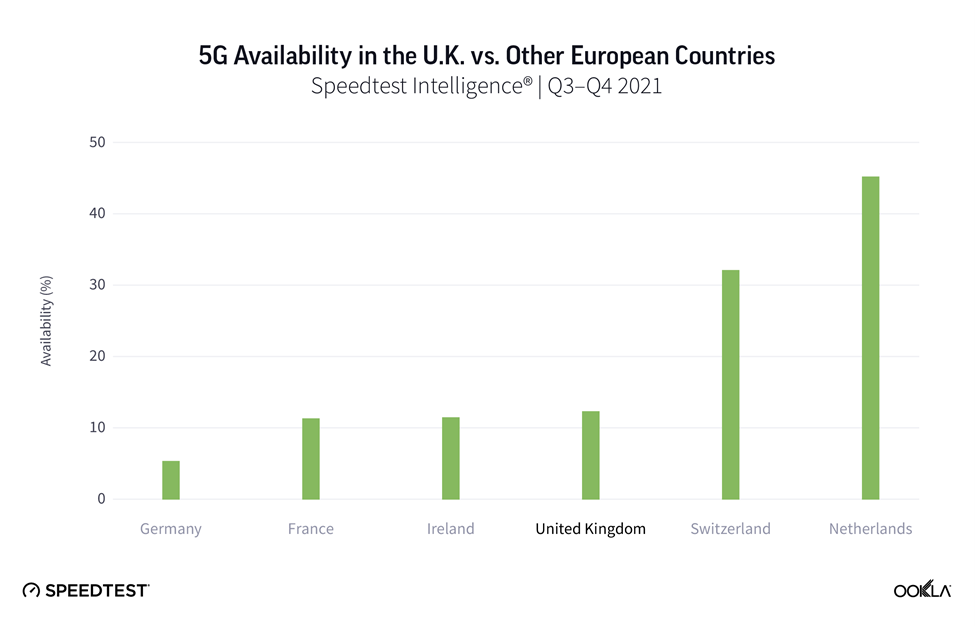 The telecom regulator Ofcom in its Connected Nations report stated that the uptake of 5G-enabled handsets across the UK increased from 800,000 in 2020 to over six million in September 2021, accounting for around 10% of all devices. This is still far behind South Korea, which was the first country to commercialize 5G in 2019 and where the number of smartphone users on the 5G network reached roughly 20.2 million in November 2021, equivalent to 28% of mobile subscriptions.

According to Counterpoint Research, the UK is the leader in Western Europe in terms of 5G penetration of smartphone sales. In Q4 2021, 83% of smartphones sold in the UK were 5G enabled, compared to the regional average of 73%. In time, this will translate into a larger install base of 5G devices and share of overall subscriptions.

Three UK was the fastest 5G operator in the UK

EE had the highest 5G Availability at 19.3% during Q3-Q4 2021, ahead of Three UK (14.4%), Vodafone (9.8%), and O2 (7.8%). In a bid to extend its 4G LTE network coverage, EE has deployed small cells to boost capacity in high-demand areas. Soon, the operator will begin trials to extend the use of small cells to 5G networks by upgrading Nokia’s AirScale portfolio.

Mobile operators are actively expanding 5G networks and the 5G adoption in the UK is growing, stimulated by greater smartphone availability and operators’ innovative services. We’ll be watching 5G performance closely in the UK using Speedtest Intelligence. If you want to learn more about how Speedtest Intelligence can help you benchmark your 5G performance against competitors, please inquire here.