Women continue to be left behind: Sizing the mobile gender gap in 2018

GSMA Connected Women’s latest study reveals for the first time the magnitude of the gender gap in mobile internet use across low- and middle-income countries, as well as illustrating the persistent gender disparity in mobile ownership, and the barriers to ownership and use. The report is based on over 25,000 face-to-face interviews across 23 countries. This blog provides an overview of the study’s key findings.

Women are being excluded from the digital revolution

The spread of mobile technology has brought many benefits. It provides access to information, services and life-enhancing opportunities, often for the first time. In particular, it can empower women by making them feel safer and more connected, for example allowing them to contact family in an emergency.[2]

However, the benefits of mobile are not spreading equally. There remains a substantial gender gap in mobile phone ownership in low- and middle-income countries, with women 10% less likely than men to own a mobile.[3] This translates into 184 million fewer women than men owning a mobile phone across these countries.

Figure 1: The gender gap in mobile internet use in low- and middle-income countries, by region 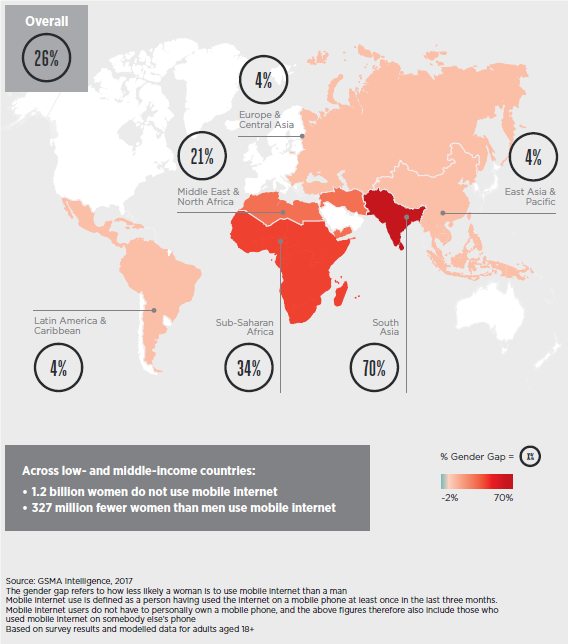 The mobile gender gap is largest in South Asia

The gender gap varies between and within countries and regions (see Figure 2), and is typically more pronounced in rural areas than urban ones. It is widest in South Asia, where women are 26% less likely to own a mobile than men, and 70% less likely to use mobile internet. 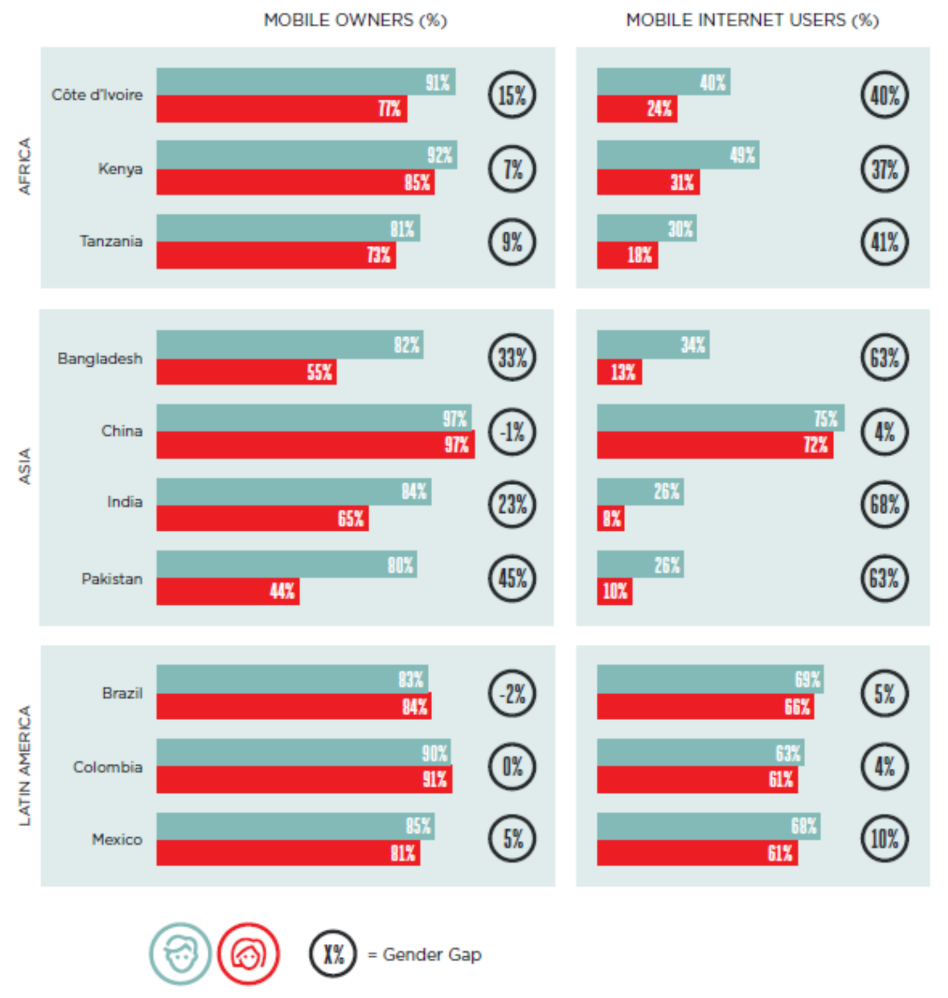 % of total adult population, by country and gender

The barriers to ownership and use vary by country, but cost is key

The cause of the mobile gender divide is complex, and rooted in a range of social, economic and cultural factors. However, cost – including of handsets, credit and data – stands out as the greatest barrier to owning a mobile and using mobile internet for both men and women across almost all countries.[5]

The other main barriers to mobile ownership and mobile internet use vary by country, and are often felt more acutely by women. These include low digital literacy and literacy, lack of perceived relevance and safety and security-related issues – such as harassing calls from strangers and fear of identity theft. Women are also less likely than men to be aware of mobile internet in the first place.

The fact that women often experience barriers to mobile ownership and use more acutely than men is likely explained by underlying social norms, such as women being less likely to receive an education or be employed.

As mobile technology proliferates, it is of increasing importance that the international community takes action to address the gender gap, to ensure that women are not excluded both socially and economically in an increasingly digitised world. Unequal access to mobile technology threatens to exacerbate the inequalities women already experience. Addressing the mobile gender gap will bring benefits to society, the economy and to individual women and families, while also contributing to the achievement of the UN Sustainable Development Goals.[6]

Closing the gender gap also represents a substantial commercial opportunity for the mobile industry. If mobile operators in low- and middle-income countries could close the gender gap in mobile ownership and mobile internet use today, this would generate an estimated incremental revenue of USD 15 billion over the coming year.[7]

The Mobile Gender Gap Report 2018 can be read here.

[1] GSMA Intelligence, Q4 2017
[2] Previous research by GSMA Connected Women found that 68% – 94% of women in each of the 11 countries surveyed reported that they feel safer (or would feel safer) with a mobile phone – GSMA, 2015, “Bridging the gender gap: Mobile access and usage in low- and middle-income countries”, p. 12
[3] Mobile ownership is defined as a person having sole or main use of a SIM card (or a mobile phone that does not require a SIM), and using it at least once a month. The gender gap in mobile ownership and mobile internet use refers to how less likely a woman is to own a mobile (or to use mobile internet) than a man.
[5] The 2017 GSMA Consumer Survey asked respondents whether certain pre-determined barriers were preventing them from 1) owning a mobile (if they did not already own one) or 2) using mobile internet (if they had used a mobile in the last three months and were aware of mobile internet, but did not use it
[6] Providing more equitable access to mobile for women has the potential to contribute to a range of SDGs. For example, SDG 5 (Gender equality and the empowerment of all women and girls), SDG 1 (No poverty), SDG 4 (Quality education) and SDG 9 (Industry, innovation and infrastructure).
[7] The $15 billion estimate assumes that the gender gap in mobile ownership and mobile internet use would be closed during 2018, and represents the subsequent 12-month incremental revenue opportunity.