Digital inclusion is not negotiable

Around the world, digital, data and technology are changing the way we live and work. The internet is a major aspect of this shift, and is shaping business, education and communication for billions of people. Mobile technology is playing a key role in delivering these benefits, with mobile internet used by more than 3.5 billion people globally. For many, it’s the only means of internet access.

However, it’s essential that no one is excluded from the benefits that the internet – and mobile internet in particular – can deliver. This was a particular focus of the recent International Telecommunication Union and UNESCO Regional Digital Inclusion Week for the Arab States. Digital inclusion is a similar priority for the GSMA, a fact highlighted by our Mobile Connectivity Index (and accompanying State of Mobile Internet Connectivity report).

The GSMA Mobile Connectivity Index measures the performance of 163 countries – representing 99% of the global population – against the four key enablers of mobile internet adoption. The four enablers – infrastructure, affordability, consumer readiness, and content and services – are useful indicators of digital inclusion, from both the supply and demand perspectives.

With regard to the ‘supply’ side, we need to ensure that everyone lives within the footprint of mobile internet (in particular, 3G and 4G connectivity). There has been considerable progress achieved here, with more than 300 million people connecting to the mobile internet for the first time in 2018. Infrastructure deployment has been particularly significant in recent years, including notable acceleration in network rollouts by mobile operators across Sub-Saharan Africa in 2018.

Despite these developments, there still remain 750 million people around the world (10 per cent of the global population) without mobile internet coverage – and closing this ‘coverage gap’ is crucial. It will require engagement from policymakers and industry, including building on the above achievements. Progress is heading in the right direction. In 2018, for the first time, amongst those covered by mobile internet networks there were more mobile internet users than non-users.

However, connectivity does not always immediately follow coverage and there need to be efforts to stimulate demand for mobile internet. With regard to this ‘demand’ side, at the GSMA we split this into five broad areas – which align with the Mobile Connectivity Index enablers mentioned above.

First, we need to ensure that mobile services and devices are affordable and accessible for everyone. In this area there has been progress globally, as well as in MENA. In the former, mobile data continues to become more affordable – and the price of mobile internet-capable devices has fallen considerably. The State of Mobile Internet Connectivity report highlights that, in MENA, the cost of 1GB of data – as a percentage of monthly GDP – has more than halved in recent years. Internet-enabled devices have also significantly reduced in cost. These developments will hopefully translate into increased usage of mobile internet.

In addition, we need to increase the relevance of mobile internet for everyone – particularly those not yet using the mobile internet. Globally, the Mobile Connectivity Index highlights that instant messaging and social media continue to dominate mobile internet use in low- and middle-income countries (LMICs). Similarly, progress is being made in increasing the amount of content and services available in local languages (although some areas lag behind). GSMA analysis shows that, in MENA, mobile social media penetration has more than doubled and there has been a small increase in the region’s UN Online Service Index score for e-Government. Often, e-Government is a particular driver of internet – and mobile internet – uptake and usage.

Finally, it’s essential to build the skills, knowledge, and readiness of those not using mobile internet (as well as driving improvements in the abilities of current mobile internet users). Across surveyed individuals in LMICs, a lack of digital literacy and associated skills is the biggest barrier to using the mobile internet. Safety and security is also a particular concern in a number of regions around the world. This can represent a wide range of factors – from online and offline harassment, to viewing harmful content, and ensuring the security of personal information. These factors can be considerable barriers to using mobile internet – both initially, and over the longer-term. 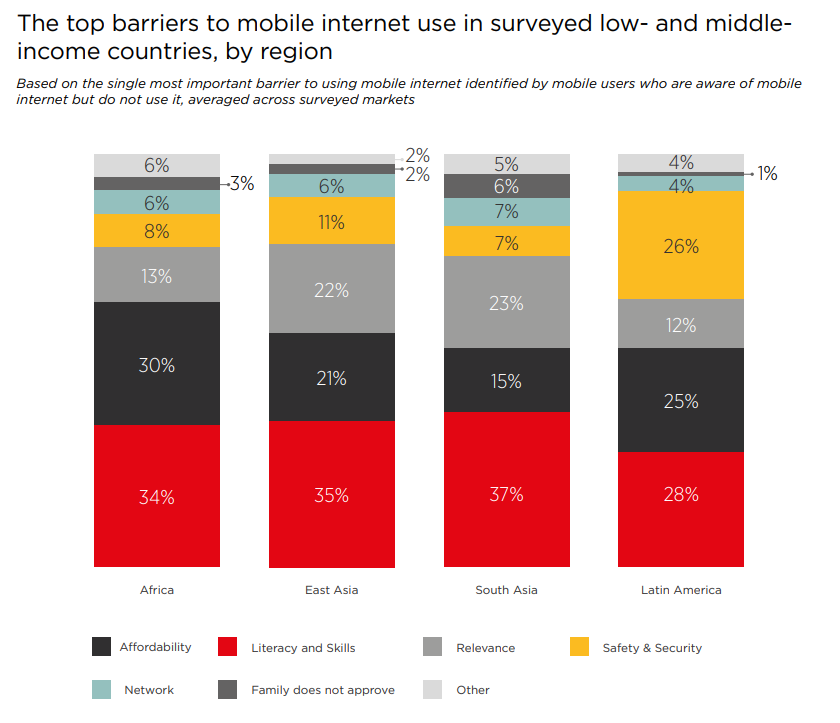 All of the barriers and challenges in these five areas – affordability, accessibility, relevance, skills, and safety and security – often disproportionately affect women and other marginalised populations. Reflecting this, the GSMA Connected Women team is also exploring each of these five areas in more detail, including their impact on women’s usage of mobile technology, in a separate blog series.