Telecom circularity – as a service

The following is a guest blog post by Joost de Kluijver, Director of Closing the Loop.

There is little doubt technology will play an increasingly big role in society in years to come. A role that is also about enabling the Sustainable Development Goals. But how can tech become in line with societal needs, itself?

In 2017, an Accenture report came out showing what ‘digital access’ can do to ensure the world’s growth is more sustainable. A clear link was shown to many of the Sustainable Development Goals (SDGs) and the increased use of digital technologies. Meaning positive impacts – such as the reduction of poverty and hunger, and many others – can be supported by current and expected advancements in the world of tech.

One of the messages in the report was abundantly clear – the industry’s ambitions to be a SDG supporter cannot go hand in hand with a further increase in electronic waste. Electronic waste is the world’s fastest growing waste stream, the report stated – and it still is, today. This boils down to a shocking reality: especially in emerging markets, it is estimated that more than one billion mobile phones would reach end of life and their owners would not have access to any form of recycling facility or service. As a result, electronics that bring so much value to people’s lives in developing countries, often end up in landfills or are burned in the open to extract metals.

Electronic waste, or e-waste, is thus rightfully seen as one of the IT industry’s biggest global challenges. But what if it’s actually a huge opportunity for business and society? That’s the question the telecom industry in the Netherlands asked, and the answer led to a completely new approach to the recycling challenge.

One global development to tap into is on the agenda for just about any large organisation: green procurement. Ecovadis’ research in 2017 mentioned that some 97 per cent of all corporates, municipalities and national governments aim to buy stuff in a (more) responsible way. But that aim is quite difficult to deliver on, for the IT industry. Electronics’ supply chains are notoriously difficult to create transparency on, let alone make more sustainable. Two problems? Or one opportunity?

T-Mobile, Samsung and Dutch social enterprise Closing the Loop took the latter view. They implemented a circular service now commonly known as ‘One for One’. It is explained in this short video, and is quite straightforward: the material footprint of a new phone (sold in the Netherlands) is offset by recycling one old ‘scrap phone’. The latter is collected in the emerging world, where electronic waste is abundant. In the Netherlands, the service became award-winning as it’s a simple, transparent way to offer green services – or ‘circularity’ – to customers. These customers, such as the Dutch government, are now able to procure phones in a greener, ‘closed loop’ way.

‘Circularity as a service’ – so, how does this work? 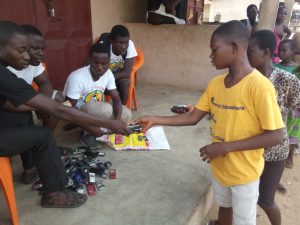 When a customer purchases a new phone, a small fee is added to the purchase price. That fee is used by Closing the Loop to collect an end-of-life scrap phone in a developing country, such as Ghana. The scrap phone is bought through small phone repair shops or other informal channels. Thus creating jobs and income, while reducing pollution. Next stop in the journey of the old phones: Europe, where this ‘waste’ can be recycled and over ten – increasingly scarce – precious metals are extracted and made fit for re-use.

This service offers an introduction into circular procurement without the complicated procurement process.

Most organisations normally do not see ‘closed loop IT purchasing’ as a key impact area for them (which it is for consulting firms, IT focused companies and of course the telecom industry). Such offsetting or compensating for the material footprint of phones is a great way to engage and educate this stakeholder and their respective employees.

The telecom industry is in a great position to deliver key tools for a transition to a world that’s in line with the UN Global Goals. GSMA’s 2019 Mobile Industry Impact Report reconfirmed just that, as did research by Deloitte and GeSi. The latter report also pointed out the need for the industry to pick up the pace of cleaning up its own act. This example of private-private collaboration from Netherlands shows that the telecom industry is up for the challenge.