The findings of this blog are based on Findex 2017 microdata released in October 2018. In this blog, we discuss the role of mobile money in driving financial inclusion, particularly for women.

Since 2011, an impressive 1.2 billion adults have obtained an account with a bank or mobile money service, representing great strides in escaping poverty and boosting prosperity. However, these gains have not benefitted all groups equally; globally, women are still 10% less likely than men to own an account[1] – stuck at the same level as 2011 and 2014.

According to the Findex 2017, the gender gap in mobile money account ownership has slightly narrowed since 2014. Indeed, across low- and middle-income countries (LMICs), women were 33% less likely than men to own a mobile money account in 2017 (compared to 36% in 2014).[2] However, this aggregated figure masks significant variations in mobile money adoption and use amongst women across different regions and countries. 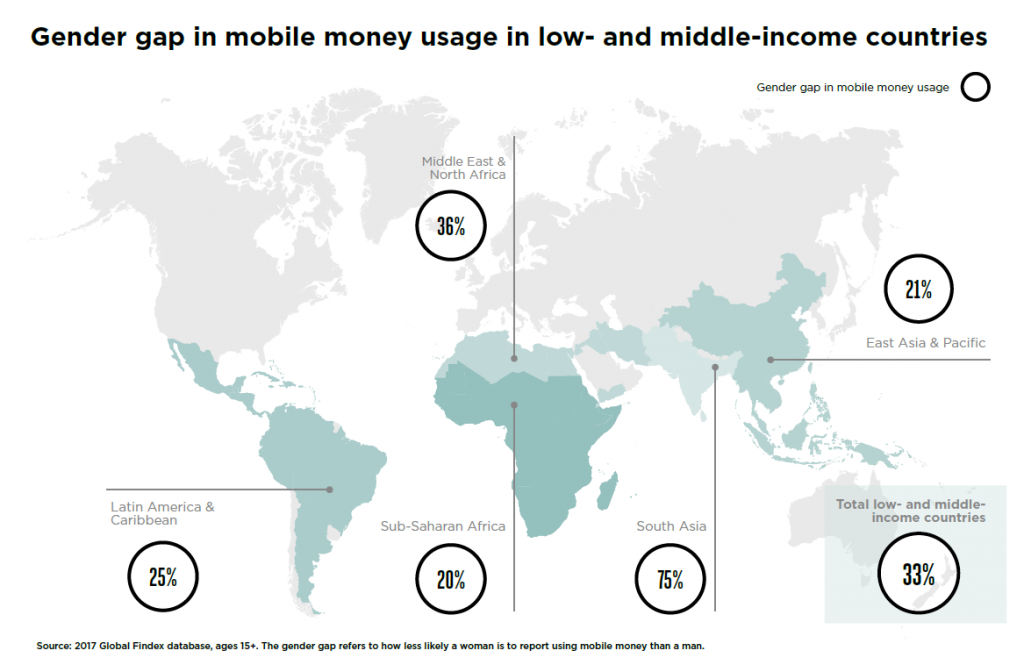 In Sub-Saharan Africa, mobile money has helped to narrow the gender gap in financial inclusion

Considering the 28 countries across the region with more than 2% mobile money penetration in 2017, a reduction in the gender gap in overall account ownership (both financial institution and mobile money) is seen in just over half (seventeen) of these markets since 2014. In six of these countries (Côte d’Ivoire, Kenya, Mali, Malawi, Uganda, Zimbabwe), this reduction can mainly be attributed to the simultaneous growth of mobile money (see figure below).[4] Also, in many countries, the gender gap is lower with mobile money than with traditional financial services.

This indicates that mobile money has the potential to significantly drive financial inclusion for women.

Across Sub-Saharan Africa, 58% of women are still financially excluded. Several barriers prevent women from accessing and using a mobile money account, from a lack of identity document, perceived lack of need to lack of trust and fraud. While most of the barriers to mobile money access and use are either disproportionately affecting women or are similar for men and women, it should be noted that 57% of adult women in LMICs are unbanked. Therefore, initiatives that will address these barriers are likely to naturally benefit women disproportionately.

Getting mobile devices in the hands of women is the main prerequisite to mobile money account ownership. There is still a 15% gender gap in mobile phone ownership in the region with only 69% of women across sub-Saharan Africa personally owning a mobile phone. In almost all countries across the continent the mobile ownership gender gap is widest in rural areas, where women tend to be poorer and more illiterate and see a mobile as less relevant. To realise the full potential of mobile money for women in Sub-Saharan Africa, closing the gender gap in mobile phone ownership should be prioritised.[5]

Lack of access to identity documents prevent women from opening a mobile money account. For example in Chad, where the gender gap in mobile money reaches 45%, only 21% of women have a proof of identity compared to 55% of men. This is one area where close collaboration between regulators and operators for implementing simplified processes for customer identification will help increase the chances of driving adoption of mobile money amongst female customers. For example, using tiered KYC could make it easier for women to open a mobile money account.

Research in Côte d’Ivoire and Mali show that when women have a mobile money account, they are as likely as men to try the service and become regular users. However, awareness of mobile money amongst women does not necessarily translate into use. Poor understanding of the service, perceived lack of need, low levels of digital skills and literacy, and lack of trust were the main barriers that need to be addressed to move women along the mobile money customer journey.

Our recent research conducted in Ghana[6] found fear of fraud as being a barrier to mobile money use affecting women more strongly than men. To increase women’s trust in mobile money, it is important for mobile money providers to be transparent to their customers. Several operators across the continent have adopted the key principles of mobile money certification[7] and invested in awareness campaigns to educate customers about safety and security and how to protect their personal information.

Going forward, further understanding and effort is required to close the mobile money gender gap. We encourage more in depth studies on this topic substantiated by regional and global data. To our knowledge, however, studies uncovering barriers to mobile money adoption and use are country specific and results not comparable across the board. This year, the GSMA Intelligence consumer survey includes a module on barriers to mobile money account ownership in 15 low- and middle-income countries. Results from this survey which are planned to be published in early 2020, will for the first time provide quantitative findings on the barriers to mobile money uptake that affect women disproportionately to men.

This blog was co-authored by Nika Naghavi, Data and Insights Director of the Mobile Money programme, and Anne Delaporte, Insights Manager of the Connected Women programme.